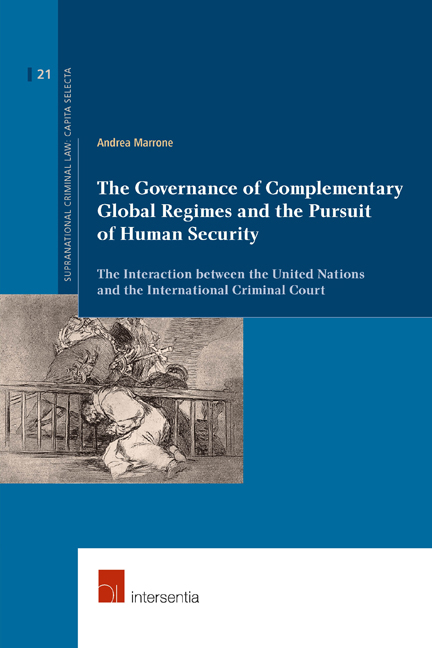 This study explores the governance of global regimes fostering peace, justice and security in extreme situations of war and crime. It examines the quest of complementarity between international frameworks of governance and the dilemma of human security measures applied in the practice on the ground in conflict and post-conflict situations. It debates the challenges, obstacles and concerns in the governance of peace operations, law enforcement and civilian protection duties. It argues about the meaning of international humanitarian escalations of last resort under the flag of civilian protection duties. It debates the requirement of a political road map centralizing civilian protection duties in collapsed societies. It examines the governance of international mandates in the field operations not being appropriately integrated between them, and which obviously lose part of their effectiveness. The analysis of the humanitarian escalations of last resort between complementary global regimes and their impact in the field operations is central for new policy orientations. The presence of both the United Nations and the International Criminal Court; the configuration of international mandates on the ground; the deployment of peace enforcement operations; the investigations and prosecutions of mass atrocity crimes are interdendent resources. They deserve accurate risk assessments for the sake of civilians in multiple situations. These global tools have the potential to improve human security expectations in situations of war and crime. There is, however, a long way ahead. After a decade of the Court's existence and activity the practice demonstrates the needs for integration, harmonization and consolidation between global regimes of complementary character.

The preliminary part of this study addresses serious concerns in the institutional and normative decentralization characterizing the emerging regime of justice falling under the Rome Statute. It also emphasises the theories of ‘statehood’, ‘sovereignty’ and ‘governance’ and the urgent requirement of political convergence on sensitive issues. The introduction argues that due to the absence of a supranational organization for an implementation of the emerging regime of justice at domestic, regional and international levels the harmonization between so defined multilateral, global, universal, complementary international governance institutions involved in conflict and post-conflict situations is fundamental.

Type
Chapter
Information
The Governance of Complementary Global Regimes and the Pursuit of Human Security
The Interaction between the United Nations and the International Criminal Court
, pp. ix - xiv
DOI: https://doi.org/10.1017/9781780685540.002[Opens in a new window]
Publisher: Intersentia
Print publication year: 2016