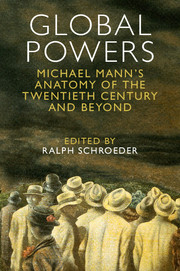 “How is the Empire?” King George V asked as he lay dying. “All's well, sir, with the Empire,” replied his secretary.

Michael Mann's fourth volume surveys the rise of the post-1945 global order. In these decades, American power holds center stage. In Mann's account, the world wars of the first half of the twentieth century bring the European era to an end. The great European empires and the “segmented” global system built around them are swept away. Out of the rubble emerges the United States. Unrivaled in power, it seizes the opportunity to reorganize the world. America's interest in an open world economy and the threat of rising Soviet power trigger an ambitious world order-building project. What emerges is a new type of empire – built not around colonies but client states and a global system of alliances. This American-style imperial system thrives, backed by the sword and the bible – that is, backed by military power with global reach and a sense of mission. It is, as Mann argues, “the only global empire there has ever been.” Despite its novelty, the American empire is nonetheless an empire, a global order built and maintained by American power and self-regard. With the collapse of the Soviet bloc and the end of the Cold War, the United States now stands alone as a global power – the last empire.

This American-style empire plays a leading role in Mann's world-historical narrative. It is one of three pillars of the global system, together with transnational capitalism and the nation-state. It is a protean force as Mann tells the story. Under American auspices, the world economy entered a “golden age,” non-Western states gained independence and stable geopolitical relations were “cemented” among most of the advanced countries of the world. But despite these wider advances in the global order, Mann insists that America runs an informal empire. Mann notes that most Americans “deny they ever had an empire,” but with this volume he intends to “prove them wrong.” By insisting on this label, Mann is emphasizing that the postwar global order is built on an organized system of American domination. The implication is that it is – like the empires of the past – an imposed system of hierarchical rule. Like past empires, American military force stands ready to enforce the terms of order.