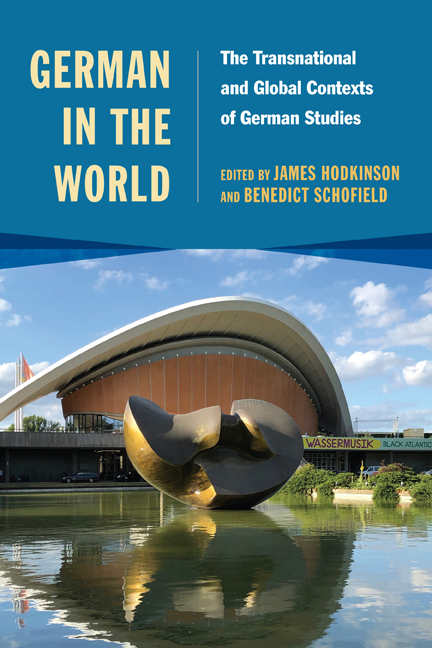 THUS FAR, THIS VOLUME has primarily explored the ways in which German-language literature, and the disciplinary and canonical approaches that are often used to structure it, have nevertheless addressed notions of “worldliness,” whether that be in the ways in which German-language culture has contributed to world literature; in the ways it has been shaped by voices and cultures from around the globe; or in the ways in which postcolonial and transnational approaches have fruitfully destabilized any notions of “center” and “periphery,” or indeed of “nation”—that “deterritorialization” of German studies as a discipline outlined in the introduction to this book. Part 1 has thus explored what we argue is ultimately a productive tension between the local and the worldly, and the ways in which the traditional boundaries we use to delineate and describe our discipline are, in fact, already inherently permeable. Without ignoring the continued dominance of the nation and the canon, and the patterns of exclusion these undoubtedly still create, the preceding chapters have attempted to showcase this more “intrinsic” mobility of German-language culture across a range of regional, national, and transnational contexts.

Yet German studies is mobile in other ways. After all, it is not just texts and authors that cross boundaries and are shaped by wordily influences: the discipline itself is co-constructed across global locations, and we as its scholars are equally part of this global mobility through our careers across institutions, continents, and disciplines. In this second part, then, we seek to innovatively map this wider mobility by looking at the shape and scope of German studies across a range of diverse cultural and geographic contexts, and the agility of German studies in those contexts, even at a time of perceived disciplinary crisis.

Part 2 opens with Carlotta von Maltzan's chapter on German studies in a South African context. Picking up directly from Dirk Göttsche’s closing chapter in Part 1 on the development of a postcolonial German studies, von Maltzan explores how German studies has the “the dubious status of claiming the longest [disciplinary] history on the African continent” because of its roots in the colonization of the Cape and the early “paracolonial presence” of Germany through its settlements and missionary work.