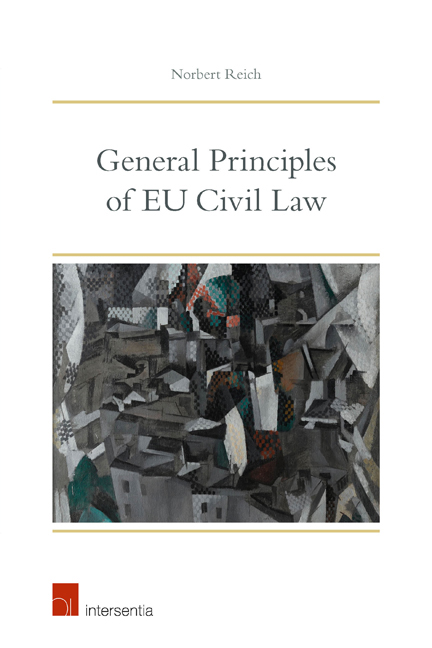 Chapter 6 - The Principle of Proportionality

IMPORTANCE OF THE PRINCIPLE OF PROPORTIONALITY FOR EU CIVIL LAW: SOME GENERAL REMARKS

The principle of proportionality as a constitutional principle of EU law – including EU civil law – was first developed to justify restrictions by Member States on free movement under the public policy or general interest proviso. The Court summarised the basic principles in Gebhard mentioned earlier within the context of “framed autonomy” (1.9): Member State restrictions on autonomy of contracting which have a negative impact on fundamental freedoms must be justified not only by a legitimate public interest, but they must also be suitable for attaining the given objective (relationship between means and end), and be necessary for achieving the proposed goal, without putting an excessive burden on the individual. In general terms, this amounts to the “less restrictive alternative” test. A state measure which puts an unreasonable burden on the individual and which can easily be substituted by a less intrusive measure capable of attaining the same objective will not be regarded as being “necessary”.

The Gebhard test has been used many times in later cases, sometimes with slight variations in the wording, which I will not follow up here. Its impact on (mandatory) contract law of Member States restricting free movement of goods, services or capital has been mentioned above with some examples from ECJ practice (1.10–1.11). With regard to the “imperative requirements in the general interest”, the catalogue of these interests – consumer or worker protection, environmental concerns, fairness of commercial transactions – is an open-ended one, with the exception of “purely economic interests”, which do not justify restrictions. Member States will usually be able to find a justified public interest which legitimates restrictions on the exercise of fundamental freedoms by EU market citizens. The debate in the many cases which have been decided under the Gebhard test, or closely related tests, will therefore usually concentrate on: