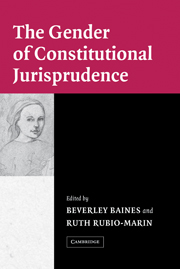 9 - “No Nation Can Be Free When One Half of It Is Enslaved”: Constitutional Equality for Women in South Africa

… freedom cannot be achieved unless women have been emancipated from all forms of oppression … unless we see, in practical and visible terms, that the condition of the women in our country has radically changed for the better and that they have been empowered to intervene in all aspects of life as equals with any other member of society.

When, in 1993, South Africans first started drafting a constitution for a democratic dispensation, gender equality was firmly on the agenda. However, the priority it should be given and the extent to which it should determine the development of the many systems of customary law in the country were disputed.

For most of the twentieth century, politics diverged along two, separate streams. White politics developed through official political and legal channels, while black politics did so outside the official structures. In white politics, South Africa saw changes relating to women's rights that more or less matched developments in the West. White women were given the vote in 1930. Laws relating to matrimonial property for white people were gradually reformed. In the 1980s, systematic challenges to inequality in the workplace began. Grave concerns concerning the situation of women who were not classified as white were occasionally raised in official political forums but, by and large, such concerns were dismissed with the assertion that black people were “not ready” for development or, more cynically in a system which gave black people no political representation, with the response “we cannot presume to tell black people how to run their affairs.