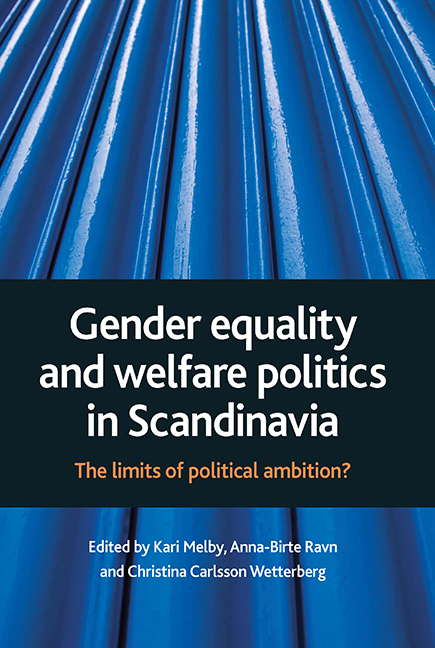 Gender Equality and Welfare Politics in Scandinavia
The Limits of Political Ambition?
Buy print or eBook[Opens in a new window]

eight - Dilemmas of citizenship: tensions between gender equality and cultural diversity in the Danish welfare state

The multicultural challenge to gender equality

Feminist scholarship has asked important questions about multiculturalism and gender equality and about the relation between women's rights and respect for cultural diversity. The objective of this chapter is to discuss the challenges from migration and multiculturalism in the context of the Nordic welfare states by looking at the tensions between gender equality and respect for diversity. The focus is on the gendered conflicts and tensions between gender and ethnicity in the Danish approach to citizenship.

The problem of multiculturalism and gender equality has only recently been addressed in the Nordic countries (Mørck, 2002; Siim, 2003; Andreassen, 2005). One inspiration is the debate sparkled by Susan Moller Okin's challenging article (1999), ‘Is Multiculturalism Bad for Women?’, in which Okin explored the tensions between group rights and women's rights and claimed that multiculturalism has been gender blind. The article raised an important debate about multiculturalism and feminism and about the relation between gender equality and respect for cultural diversity (Kymlicka, 1999; Parekh, 1999). Okin's article has been interpreted both as a useful feminist critique of multicultural approaches to group rights that often rate principles of racial equality above those of gender equality (Phillips, 2005) and as a simplistic and universalistic approach to citizenship and multiculturalism that fails to address the contextual nature of rights, family, religion and the public–private divide (Benhabib, 2002). Okin has recently addressed her critics and restated her position, emphasising that she is not against multiculturalism or group rights. What she proposes is that the majority has a special responsibility to women in minority groups whose oppression may be exacerbated by granting group rights and therefore the female members of patriarchal minority groups need to be consulted in debates about group rights (2005, pp 74–5).

Okin's article has raised an important debate about the role of culture and religion and about the voice of women in minority cultures. The article emphasises the negative role of religion and patriarchal oppression in minority cultures and it can be criticised for being insensitive to minority cultures. After 9/11 there has been a strong political trend to make culture and religion the cause of women's oppression and to treat minority women as passive victims of their culture (Siim, 2003). Against this background it is important to emphasise that issues related to gender equality, multiculturalism and women's rights are contextual and should be explored through transnational analysis.