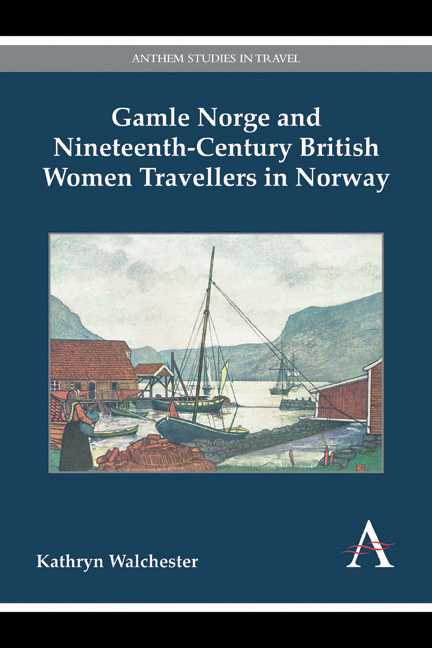 This chapter considers the extensive body of accounts of Norway by women in fiction and the impact of the expansion of travel upon these texts. A large number of these texts were inspired by journeys to Norway and Scandinavia, and some, such as Marie Corelli's Thelma, were to inspire tourist phenomena of their own. The main texts to which I will be referring in this chapter alongside Corelli's are: The Recluse of Norway by Anna Maria Porter (1814); Feats on the Fiord: A Tale of Norway by Harriet Martineau (1841); A Hardy Norseman by Edna Lyall (1883);and Keynotes by George Egerton (1893).

Interest in Norway both as a destination and as a setting for fiction grew through the nineteenth century. The first novel by a woman set in Norway was Anna Maria Porter's The Recluse of Norway, published in 1814. Although it was received moderately well by critics, the setting and the difficulty which some readers found with Norwegian names hampered their enjoyment, indicating the lack of familiarity with a cultural discourse pertaining to Norway at this time. After the middle of the century, there was a considerable increase in the interest in Norway as more travellers went there, more writers of fiction set novels there and more books about the region were published. Harriet Martineau's Feats on the Fiord: A Tale of Norway, first published in 1841, was reprinted during the rest of the century. The interest in reading about Norway grew to such an extent that by the end of the 1880s and the early 1890s there was a cluster of extremely popular fictional texts by women published, including Mrs Edward Kennard's Just Like a Woman (1894), Edna Lyall's A Hardy Norseman (1889) and Marie Corelli's Thelma: A Norwegian Princess (1889), which was reprinted in 56 editions.

By the end of the century certain popular imaginings of Norway had been established and were rewritten in many novels by women. This chapter explores the provenance of some of the principal ways in which Norway was constructed in these nineteenth-century novels and argues that during the nineteenth century a reciprocity was evident between travel writing, fiction and poetry, which concretised and popularised certain ideas about Norway.