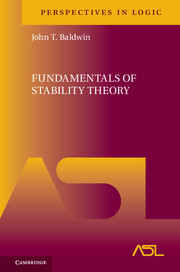 The first section of this chapter purports to be a nontechnical introduction to stability theory. It attempts to provide an overview where a neophyte can find his bearings when the subsequent discussions threaten to lose the forest for the trees. The second section contains the necessary list of prerequisites and fixing of notation. We attempt to explain a few of the conventions which have become second nature to specialists but are unfamiliar to many model theorists and unknown to recursion theorists. The third section is an attempt to both summarize the results that a reader should at least be aware of and to show how some of the particular constructions of this book fit into the proof of a more familiar result, Morley's categoricity theorem. One aim of this book is to show the relationship between stability theory and classical algebra. Although various illustrations of this relation will appear in the book, the simplest continuing example is the theory of modules. Thus, in Section 4 of the first chapter we relate the basic properties of the model theory of modules. As we explain in Section 1 the subject of stability theory contains both a structure and a nonstructure side. Most of this book concerns the structure theory. Section 5 contains a brief survey of the methods and results on the nonstructure side.

An Overview of Stability Theory

An algebraic structure theorem (Ulm's theorem) assigns to each member of a class K of algebras (countable Abelian groups) a system of invariants (the Ulm invariants) which determine the structure up to isomorphism. But many familiar classes, for example, the class of linear orderings, have no such structure theorem. A classification theorem for universal algebra determines for each member K of a family K of classes of algebras whether or not such an algebraic structure theorem holds for K, and, if there is one, exhibits it.This book expounds the fundamentals of what is, perhaps, the first such classification theorem for universal algebra.