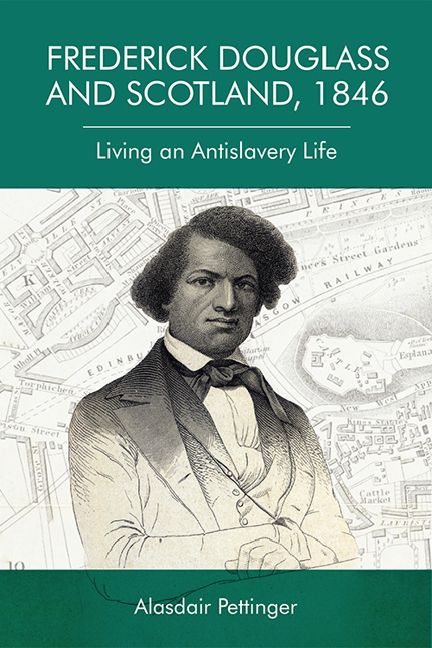 Douglass's appearance at the London Tavern was not his last speech in Britain. Promising to keep his closing remarks brief, he reminds his audience that ‘I have to speak again to-morrow night almost 200 miles from this place.’ This meeting was in Huddersfield, and the day after, Thursday, he headed for Bristol, and another ‘farewell address’. On Friday he must have taken the train to Manchester, for, according to the Manchester Express, it was from there the next morning he left, ‘accompanied by several friends, and proceeded to Liverpool, where he was joined by other friends from Glasgow, Perth, Cork, Dublin, Sheffield, Wrexham, Rochdale, &c who assembled to witness his departure’.

It was a month since he had visited the Cunard office in London and paid £40 19s for his first-cabin passage on the Cambria. Douglass had made a point of booking his return voyage on the same vessel that brought him over. He may have felt reassured that Captain Judkins, who had defended him so heroically two years before, would not permit a repeat of the insulting treatment he had faced then. But he also took care to ask Mr Ford, the London agent, whether ‘my colour would prove any barrier to my enjoying all the rights and privileges enjoyed by other passengers’. He was assured it would not.

Douglass must then have been genuinely surprised to find that when he carried his luggage on board that Saturday afternoon, and inquired after his berth, he was told that it had been given to another passenger and the London agent had no right to have sold him his ticket. The captain offered to accompany Douglass to the office of the Liverpool agent on Water Street, but Judkins's presence made no difference. Charles MacIver was in bullish mood. The company was not a reformatory society, he explained. It had to take account of the feelings – even the prejudices – of other passengers, and it was for this reason they were excluding him. Judkins was in no position to overrule his superior, but it appears that he brokered a compromise, offering his own state rooms to Douglass, a proposal MacIver agreed to on condition that he remained there during the voyage and did not come into contact with other passengers.