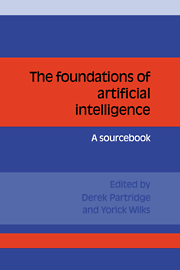 A continuing AI debate is the relationship of programs to theories. Some clarification of this issue would do much to put AI on firmer foundations.

Wilks attempts to clarify some basic issues concerning the relationships between theories and models by laying out a taxonomy for these two variously-used terms. Using the example of AI programs for language processing, he argues that such programs are not so much theories in the more classical senses, but can usefully be considered to be theories of computational processes.

We have reprinted the Bundy and Ohlsson debate from the AISB Quarterly (1984). In this interchange of ideas as to what one has a right to expect from AI research, and, in particular, what the relationship between programs and theories ought ideally to be, we see apparently very different opinions move surprisingly close together once certain terms (such as ‘principle’) have been clarified. Nevertheless, Bundy remains committed to the significance of mechanisms or techniques as the essential principles in an AI program; and Ohlsson stands by his demand for validating behavioral principles as the important product of AI programming. These two viewpoints correspond to the representations at the two ends of the sequence of abstractions discussed by Partridge in the previous chapter. And, interestingly, Bundy's analysis of Ohlsson's principle bogs down at several points just because the meaning of seemingly straightforward terms in the principle are in fact open to several interpretations and there are no more-precise restatements to fall back on (as there would be if the principle existed in the context of a sequence of abstractions).