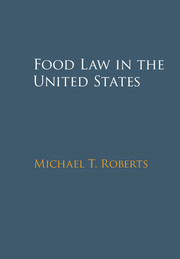 The distribution of food generates a number of issues, which are addressed in each of the chapters in this treatise; this chapter focuses solely on the economic regulation of food distribution or what may be called the regulation of food commerce. The laws that govern the commerce of food can be organized into two distinct categories: (1) laws that ensure the authenticity and integrity of food that is distributed to consumers and (2) the standards, rules, and laws that regulate the international trade of food. The complexities of problems that give rise to the adaptation of laws to regulate food commerce evidences the challenges of the modern, global food system.

[a] Perpetual Problem of Food Systems

Ensuring the integrity of the commercial food supply invariably requires law to deal with a form of food fraud or cheating known as economic adulteration or economically motivated adulteration (EMA). EMA includes the padding, diluting, and substituting of food product for the purpose of economic gain, which may or may not compromise the safety of the product. Food fraud in the form of EMA has plagued food commerce throughout history. A brief accounting of this history demonstrates the role of law in ensuring the integrity of food and the food system from which the food is derived.

Reports of EMA date back to the Greek and Roman eras. The Greek botanist Theophrastus (370–295 BC) reported on the use of artificial flavors in the food supply and on the use of adulterants for economic reasons in some items of commerce. The physician Galen (AD 131–201) listed food products in Rome that were particular targets of adulteration, including grains, spices, wine, and preservatives.

In the Middle Ages, staple foods like meat, bread, and wine were targets for adulteration. The “medieval nose” was particularly sensitive to the smell of decay, and was used to catch suppliers of putrid meat. Bread was more difficult to manage, as catching a wily baker could be a challenge. Cheating bakers sold underweight bread, the price of a loaf being fixed in relation to its weight. Such cheating led to regulations like the “Assize of Bread and Ale,” which dictated what went into everyday food goods. Guilds comprising ale conners, pepperers, and garblers enforced these purity laws with considerable effectiveness.