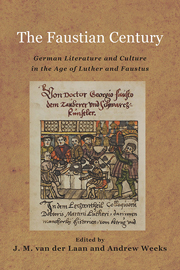 5 - Faust from Cipher to Sign and Pious to Profane

For many reasons, we can consider the sixteenth century a Faustian age. One way to define the era in Faustian terms, and probably the most obvious, involves a particular individual, part fact perhaps, but almost entirely fiction, who emerges full blown in the sixteenth century and has been with us ever since as a dynamic figure laden with meaning. That person or character is Faust himself, who embodies the zeitgeist or spirit of the age. If we survey the century, we find that Faust receives more and more attention as the years go by and transforms from a cipher, from enigmatic persona of uncertain identity, to a sign, to a clearly defined type of immense connotative potency.

The story of his emergence, at least in its rough outlines, may be fairly well known, but an initial and careful review of Faust's sixteenth-century appearances repays the effort, as it allows us to see more clearly how various, mostly sketchy accounts of an at best shadowy, if not shady, character eventually culminate in the fully developed protagonist of the novelistic Faustbücher. While Andrew Weeks begins the Faustian century with the year 1517 (and argues his case in the opening essay of this volume), I choose to start a decade earlier in 1507 with Johannes Trithemius, abbot of St. Jakob in Würzburg, himself sometimes suspected of dabbling in magic. In a letter to Johann Virdung in Heidelberg, Trithemius left us the first extant document to offer a description of someone called “Magister Georgius Sabellicus, Faustus iunior. fons necromanticorum, astrologus, magus secundus, chiromanticus, agromanticus, pyromanticus, in hydra arte secundus” (Master George Sabellicus, the younger Faust, the chief of necromancers, astrologer, the second magus, palmist, diviner with earth and fire, second in the art of divination with water).