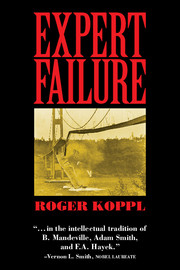 Expert Failure
Buy print or eBook[Opens in a new window]

Politicians, partisans, and pundits were surprised and traumatized by the election of Donald Trump as President of the United States. Anger at experts seems to have contributed significantly to his victory (Easterly 2016). Brexit was led in part by Michael Gove, who exclaimed, “I think the people in this country have had enough of experts” (Lowe 2016). Whatever one's opinion of Trump or the European Union, ordinary people in Western democracies have cause to be angry with experts. The Flint water crisis is an example.

On April 25, 2014, the city of Flint, Michigan changed its municipal water supply in a manner that produced impotable brown water (Adewunmi 2017). “Flint water customers were needlessly and tragically exposed to toxic levels of lead and other hazards” (Flint 2016, p. 1). “Flint residents began to complain about its odor, taste and appearance” (Flint 2016, p. 16). “On 1 October 2015, 524 days after the switch to the Flint River, the Genesee County Health Department declared a public health emergency and urged Flint residents to refrain from drinking the water” (Adewunmi 2017). On January 24, 2017, Michigan state environment officials indicated that lead levels in Flint water no longer exceeded the federal limit (Unattributed 2017). The journalist Bim Adewunmi says, however, “By the time I left Flint on 22 February this year [2017], the water was still not safe enough to drink directly out of the faucet, according to the politicians and charity workers I spoke to, and the residents’ feelings on the matter had remained at a simmer about it” (Adewunmi 2017).

In March 2016 an official Michigan task force investigating the Flint water crisis found that the Michigan Department of Environmental Quality (MDEQ) “bears primary responsibility for the water contamination in Flint” (Flint 2016, p. 6). The report found that the Michigan Department of Health and Human Services and the United States Environmental Protection Agency (EPA) shared a substantial portion of the blame (Flint 2016, p. 1). The task force's report chronicles the actions of Dr. Mona Hanna-Attisha and Marc Edwards to produce change, in part by documenting important facts such as elevated lead levels in the blood of Flint children.