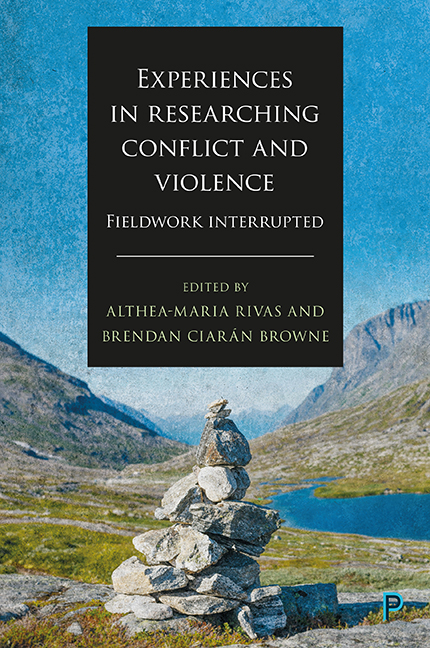 In violence, we forget who we are. (Mary McCarthy, American novelist, On the contrary, 1961)

In Mary McCarthy's 1961 collection of short stories, On the contrary, she suggests that we can become so immersed in an activity or experience that we are transported outside of our self-awareness and lose our sense of subjectivity. McCarthy's observations, on the hypnotic nature of perception, are also illustrative of the almost transcendental capacity of wartime violence. Conflict researchers, sometimes without being aware, fail to consider how our varying identities affect our fieldwork and become secondary to project implementation. For those of us who are drawn to conducting research in communities marred by political violence, McCarthy reminds us that disassociating from ourselves in order to achieve our research goals creates a predicament that can be difficult to overcome. That is to say, the tension between our attempts to be present in the field and the distance we keep from ourselves to work efficiently in the field poses a series of personal, practical and methodological challenges to researchers.

In this chapter I draw on my 14 years of exploring gender and political violence in Northern Ireland to candidly illustrate my own predicaments, anxieties and hesitations in the field as I struggled to manage my identities as a lesbian field researcher and as a first-generation Protestant Northern Irish American with ties to Loyalism. For my part, two foundational identities, ‘who I am’ (my sexuality) and ‘where I am from’ (my Northern Irish roots), were intensely difficult to manage in my first extended period of fieldwork in Northern Ireland in 2006. Despite years of research experience in Northern Ireland, I did not really have any sense of the ways the Loyalist community conceived of the lesbian, gay, bisexual, transgender, queer, intersex, allies or asexual (LGBTQIA) population, and I worried that revealing this information might negatively affect my ability to gain access to some of the more conservative sections of the Loyalist community (McEvoy, 2015).

This chapter aims to simultaneously expose and embrace the obstacles and impediments to conducting fieldwork in a conflict-affected environment while negotiating identities that may further complicate the already difficult work of the researcher.