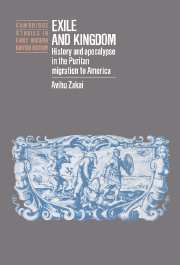 2 - The creation of sacred space I

The geographies of the mind: the incorporation of America as a sacred place in ecclesiastical history

THE ENGLISH APOCALYPTIC TRADITION AND THE SETTLEMENT OF AMERICA

The ultimate achievement of the apocalyptic tradition in England was undoubtedly the deep-seated conviction among Protestants and Puritans alike that prophetic revelations constitute the very essence of history. History, therefore, was placed within the sacred dimension of time and prophetic revelations situated within the dimension of history. Consequently, the accepted Augustinian view that an essential gulf divided sacred and profane history, or prophecy and history, was totally abolished in the English apocalyptic tradition. Prophecy became history, and history became prophecy. In other words, historical events were interpreted as the realization of prophetic revelation while divine prophecy was seen as the source for explaining the progress of history. This process was nothing less than the sacralization of historical time, or the creation of sacred time – the view that history not only revealed but also fulfilled the realization of divine prophecies.

The root of this process of sacralization of historical time lies, as we have tried to explain in the previous chapter, in the belief that the ultimate issue regarding apocalyptic interpretation or understanding prophecies, is related to the question of time. Now imbued with sacred meaning, history and time constitute the medium by which prophetic revelations reach their realization. With the rise of the apocalyptic image of history within English Protestant historiography, then, history itself became a revelatory event as a history of salvation. Through God's divine providence, therefore, history and revelation were inextricably interwoven with one another.