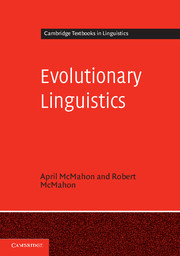 In this chapter, we shall outline exactly what we mean by ‘evolutionary linguistics’. We consider some early theories and speculations about the origin of language, and make an important distinction between evolution and history. In discussing the evolution of language (or strictly, the evolution of the human capacity for language), we need to understand the terminology of evolutionary theory, and we therefore introduce the basics of the theory of natural selection. It is worth noting, however, that many linguists do use terms like ‘evolution’ and ‘evolve’ to refer to developments in historical rather than evolutionary time, adopting evolutionary metaphors to help us understand language change. Finally, we discuss the notion that humans might now be beyond the forces of evolution, but conclude that evolution is indeed continuing, though humans may be more capable of altering our environment than other species.

Evolutionary linguistics has two interacting subjects of study, namely the issue of how, why and from what earlier systems the human capacity for language originated; and how, when and why it has subsequently developed, through descent with modification, to allow us to acquire and use the language systems we have now. The first aspect requires us to investigate where the systems we call language have come from: as Shakespeare puts it, ‘Nothing will come of nothing’ (King Lear, I:i), so it would be scientifically improper as well as completely unenlightening to invoke a mysterious blinding flash somewhere in the early history of our species before which we were silent and agrammatical beings, and after which we had fricatives, diphthongs and subordinate clauses. On the other hand, what we know of the processes of biological evolution indicates clearly that something very highly structured and apparently very specialised can indeed come from not very much: the eye, for example, has evolved independently a number of times in different lineages, beginning on each occasion from a much simpler source (Nilsson and Pelger 1994). Moreover, at least when we are dealing with simpler organisms and shorter generation intervals, this process of development of complexity can happen rather quickly: Nilsson and Pelger make a pessimistic best estimate of approximately 364,000 years for a light-sensitive patch to develop into a camera eye corresponding to roughly the structure of the modern human eye.