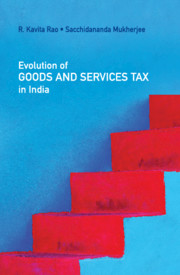 1 - Decades of Indirect Tax Reforms in India: A Journey towards Goods and Services Tax (GST)

The quest for a suitable indirect tax framework in India encompassing goods as well as services started a long time back. The constitutional assignment of powers for taxation in India included a number of stand-alone taxes on goods and services in addition to a few relatively more broad-based taxes, none of which were comprehensive in covering both goods and services. Further, this assignment divided the powers between the union and the state governments, thereby requiring a considerable degree of cooperation and coordination between the union and the state governments in order to initiate and establish a new indirect tax regime which addressed some of the concerns emanating from the old regime. Given the constitutional assignment of taxation power to different governments, fiscal autonomy enjoyed by the subnational governments, and complexities involved in bringing consensus among the subnational governments, the evolution of the Indian goods and services tax (GST) provides an interesting example of reforms in indirect taxes for scholars interested in public finance, especially in the case of federal countries.

Reforms in indirect taxes initiated since 1986–87 helped in sequencing big tax reform such as GST in India. It helped to accommodate the political-economy dimensions as well as the acceptability aspects of the tax reform. What is significant about the Indian GST is that each and every aspect of design, structure and administration of the GST has evolved on the basis of political consensus between the union and provincial governments. For a federal country like India where subnational governments enjoy more or less a power structure similar to that of the union government and where there is considerable diversity among provincial (subnational) governments, building consensus for a destination-based dual GST system is a great achievement in the history of fiscal federalism. The role played by different institutions/committees in achieving the Indian GST requires special mention here. The present chapter is an attempt to provide readers an overview into the evolution of the concept of GST in India.

India introduced GST from 1 July 2017. It is a comprehensive multistage value-added tax (VAT) on goods as well as services and it provides concurrent taxation powers to the centre (federal) and state (provincial) governments to collect tax on every stage of value addition.