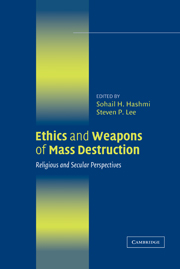 12 - Buddhism and Weapons of Mass Destruction: An Oxymoron?

TAKING STOCK OF A DILEMMA

One of the most enduring principles of Buddhist ethics is the teaching of nonviolence (ahimsa), and the first of the five basic moral precepts is not to take the life of a sentient being. In the light of these teachings, is a conversation about Buddhist perspectives on weapons with the capacity for large-scale death and destruction not a contradiction in terms? David Chappell describes the tensions in the tradition between the normative Buddhist principles of peace and nonviolence and the actual behaviors of Buddhists both past and present, for example, rulers who have promoted war in defense of nation and religion and clergy who supported militarist regimes. In the light of this tension, Gananath Obeyesekere holds that Buddhism's noble principles are inevitably compromised by history and politics, a point of view that can be applied to other religious traditions, as well. To situate the Buddhist ethical principles of peace, nonviolence, and nonkilling beyond history, however, obviates any capacity they might have to challenge and, it is hoped, to transform violence in any form, including violence associated with weapons of mass destruction. Whether Buddhism and the other world religions have anything uniquely distinctive to contribute to the specific policy decisions related to debates about WMD, such as utilization, deterrence, and proliferation, is moot. What the world's religions, including Buddhism, do have to offer, however, is a vision of hope where the values of peace, nonviolence, compassion, and the opportunity for human beings to flourish cooperatively are uppermost.