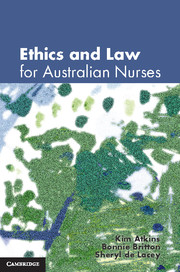 In this chapter, you will:

Ross was admitted through emergency services with chest pain and was found to have had a myocardial infarction. He was admitted to the Cardiac Unit and placed on bed rest with cardiac monitoring. On admission, Kate, his nurse, gathered information from him about his condition and lifestyle to help plan his recovery and rehabilitation. When collecting this information, Ross told her that he was married and had three teenage sons. He added that he also had a long-term and loving relationship with Gill and together they had a daughter who was seven years old. His wife did not know about his relationship with Gill or about his daughter, and he asked Kate to promise that this would not be disclosed to her. He said, ‘I know I can trust you with this information.’ He was most concerned that Kate arrange for Gill and his daughter to visit as well as notify his wife what had happened to him. Kate briefly described this unusual family situation in his notes and suggested that discreet management of visitors was required as part of his nursing care. The next day, as she entered the unit, she noticed several nurses – one of them from the neighbouring renal unit – huddled around Ross's case notes. They were whispering and giggling, apparently about her notation regarding his family situation.

This chapter introduces the concepts of privacy and confidentiality in relation to the management of patient information, and outlines legal requirements for reporting harmful conduct of health professionals and others.

The above case demonstrates how easily private and sensitive information recorded about a patient can result in a breach of confidentiality and unprofessional conduct. Kate appropriately recorded very personal information Ross had disclosed to her because she judged that it was relevant to his care. Yet other nurses perceived this to be a source of curiosity and gossip, and in sharing this with a nurse not involved in his care, had breached Ross's confidentiality. Their conduct was therefore unprofessional and disciplinary action should have been taken (see the section on mandatory reporting below).