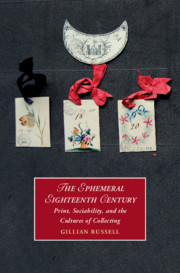 The Ephemeral Eighteenth Century
Print, Sociability, and the Cultures of Collecting
Buy print or eBook[Opens in a new window]

In their account of Romantic poetry as a medium, Celeste Langan and Maureen McLane argue that poetry, unlike the novel, ‘had a stronger claim to be considered a supermedial transhistorical venture’. However, the fiction of Austen and Edgeworth suggests that the novel too had aspirations to be a ‘supermedium’ by incorporating and aestheticising the experience of ‘common life’. The society novel in particular achieved this by assimilating the printed ephemera of polite sociability: it remediated the paper filters that facilitated social life in the eighteenth century in order to make the interstices or hyphenations of sociable life, spaces occupied by women in particular, more visible as an appropriate object of fiction. As I suggested previously, the affect of the ephemeral social encounter, the transience of events that flicker to life and disappear, were the common subject of Sarah Sophia Banks and Jane Austen, the former’s assemblages of tickets for balls and assemblies and the latter’s novels textualising the same phenomenon. The evocation in ephemeral print of ‘common life’ as a kind of diurnal historiography was the context in which the novel became central to the affective rhythms and routines of human activity, establishing an idea of the everyday as intimate, familiar, and reassuring rather than as something that was estranging in its absolute anonymity or carelessness, something to ‘fear’ in Blanchot’s terms. The materiality of the codex form of the novel, its solidity and tendency to take the reader’s time while being portable and adaptable to both private and social life, allowed the novel to remediate the specificity of social and affective experience but also to defend both itself and the reader from the abyss of entropic ephemerality. The novel thus capitalises upon an idea of the everyday that it simultaneously resists. Arguably, however, as a literary form most closely linked with the second printing revolution, with which its ‘rise’ coincided, the novel never completely escaped its affiliation with ephemera, as indicated by the enduring association of the novel and novel-reading with trashy, ‘ephemeral productions’, with that which wastes time rather than redeems it.