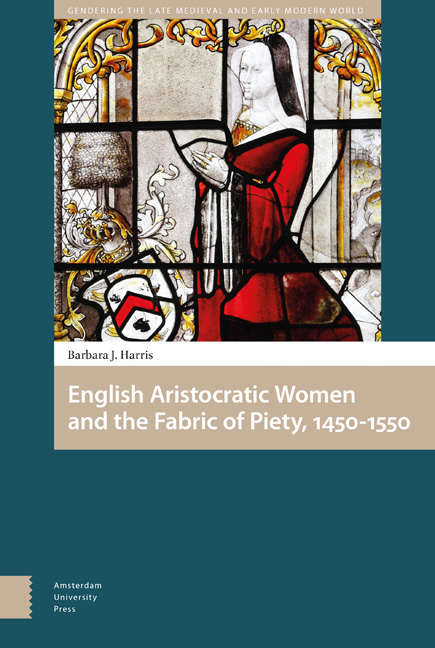 A brass inscription on the wall of St Swithin's church in East Grinstead, Sussex, records Katherine Grey Lewkenor's death in 1505 and praises her and her husband Richard for having “endowed, founded, [and] adorned” the church “to the laud and honor of God, with divers ornaments and images and an almshouse of 6 persons.” The almshouse was clearly the work of the couple, but Katherine seems to have been responsible for the ornaments referred to in the inscription. In her will, she bequeathed a silver bowl and ewer to be made into a cross for the church, and all her silk gowns to churches in the vicinity for conversion into clerical vestments.

Katherine Lewkenor was one of 82 aristocratic Yorkist and early Tudor widows whose religious bequests included fabric and vestments, plate, jewels, or prayer books. Like her, they often made gifts of this kind to more than one church, a choice reflecting the fact that they and their families owned land in many parishes and often in more than one county. Almost all of these legacies were intended for use during performance of the Mass at the church's high altar or in the women's chantry chapels. Only nine of the women gave vestments or ritual objects exclusively to their chantries. The others either gave material goods to the high altar or to both the high altar and their chantries. Their identification with the vestments and objects they donated to the high altar brought them as close as possible to the miracle performed during the Mass.

Before the break with Rome led to the gradual confiscation and prohibition of such gifts, the widows of knights and noblemen bestowed what must have seemed to be an unending stream of expensive fabrics, silver and gold plate, and jewels to the churches they patronized. As early as 1537, however, the dissolution of the smaller monasteries evidently proved sufficiently alarming to cause a dramatic decline in the number of legacies of this kind. Of the 54 women who donated vestments to churches between 1450 and 1550, for example, only four did so after 1537. Similarly, they gave only five of 38 liturgical objects for the performance of the Mass after that date.