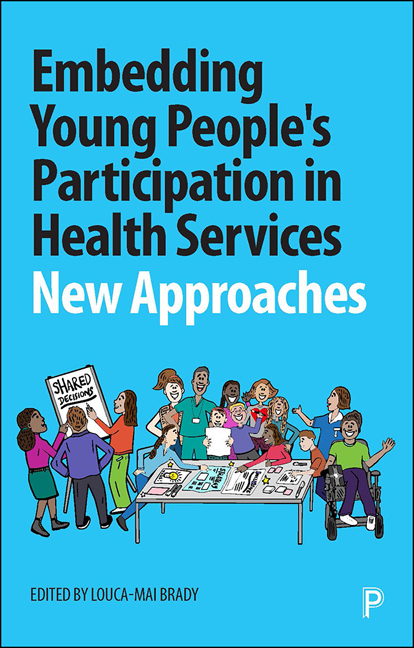 10 - Rhetoric to Reality: the Need for a new Approach

Drawing together the range and diversity of material included in this book is a challenge which highlights a key message: that one size or form of participation does not fit all. Traditional structures and processes of participation can, at times, be helpful but can potentially exclude some of the young people most likely to use health services and limit the potential for fundamental change. The range of different models and approaches to young people's participation in healthcare practice presented in this book highlight both how ‘traditional’ structures and approaches can be developed in ways that consider inclusion and diversity, and the potential for new approaches which do more to transfer power to young people.

This chapter concludes the book by drawing together the following themes and issues which emerged from the examples of practice discussed in Chapters 1 to 9, and the research which underpins this book (Brady, 2017):

There is a lack of information on how participation is understood by those who work with children and young people in healthcare, or how these understandings may affect participation cultures and practice (Brady, 2017). The starting point for this book was the commonly held understanding of participation as ‘a process by which young people influence decisions which bring about change in themselves, their peers, the services they use and their communities’ (Participation Works, 2010, p 9). But while this definition implies a more active form of participation than just listening to children and young people's views, it does not imply a fundamental change in the relationships between young people and service providers (Davis, 2011). In NHS services, as elsewhere, it tends to be adults who do the asking, the listening and have the power to put into practice (or not) decisions which young people are involved in making (Brady et al, 2018). As Cairns et al argue in Chapter 8:

the reality is that the power differential between adults and children is so wide, and the dominant discourse that defines children and young people as lacking in the knowledge, experience and ability to participate in political debate is so strong that we fail more often than we succeed.