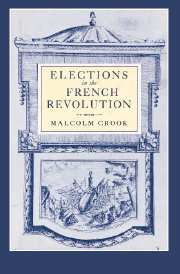 Elections in the French Revolution
An Apprenticeship in Democracy, 1789–1799
Buy print or eBook[Opens in a new window]

These days the electoral assemblies are very different to those of the Revolution. Then the people attached the greatest importance to voting and turned out en masse; as a result it was possible to discern the passions, opinions and even the most intimate thoughts of each class of citizen. Today, however, the people have come to realise that, on account of its expertise in assessing the contenders, the government alone should be entrusted with making the necessary choices. Indeed, there would be little objection if we revoked the articles in our Constitution which retain the practice of popular election.

So wrote the acting sub-prefect of Toulon in 1813, in the wake of polls which attracted a mere 5 per cent of the electorate in the naval town. His impression of revolutionary elections was decidedly rose-tinted but, contrary to widely held belief, the Napoleonic régime did not entirely abolish elections; on the contrary, the Constitution of the Year VIII, which was hurriedly issued only a month after Bonaparte came to power, re-instated a broader suffrage. Following revolutionary precedent, this constitutional document was immediately submitted to a referendum, but it was another twelve months before a further round of elections took place. Thereafter the electorate was consulted infrequently and, if the French apprenticeship in democracy and citizenship did not grind to a complete halt, it was severely dislocated under both Napoleon and his Bourbon successors.

The turn of the nineteenth century is thus a good vantage point from which to survey the electoral endeavours of the preceding decade, weighing up what had been achieved against what was left to be desired. The latest rulers of republican France were anxious to demonstrate their popular credentials with a vote on the new Constitution which invited comparison with earlier referenda.