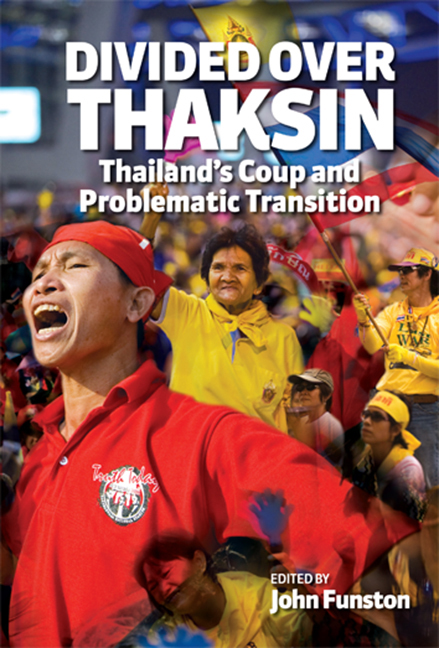 4 - Military Coup and Democracy in Thailand

Thailand' military coup on the night of 19 September 2006 came as a surprise, and was greeted with resentment by some and with joy, relief, and hope by others. The former were afraid that the coup was just the beginning of yet another military intervention in Thai politics, a tradition that represents a bitter revival of events fifteen years before in the 1991 coup and bloody incident of May 1992. Representatives of this group ranged from a number of students and university lecturers who called themselves the “19 September Network against the Coup”, to a taxi driver who ran his car head-on into an army tank stationed at the Royal Plaza to show his discontent with the coup for destroying Thailand' democracy.

For educated people within this group, using the military coup as a means to restore democracy was simply indefensible. Low-income people (including taxi drivers), on the other hand, were benefiting greatly from a number of generous financial schemes emanating from the populist policies designed and implemented by Prime Minister Thaksin after he came to office in 2001. These schemes included universal healthcare, village investment funds, the People' Bank, and cheap loans. The departure of Thaksin from power has meant the loss of many of these benefits.

However, in mentioning this, I do not mean to argue that these low-income groups, particularly the rural masses, are the “victims” of Thaksin' populist policies, as most middle class and urban intellectuals have been fond of pointing out. On the contrary, the victim thesis overlooks the significant fact that the rural poor have persistently struggled throughout

Thai history to bring political pressure to bear on various governments. The populist policies of Thaksin are in part the result of this long and arduous struggle.

Against the background of military intervention in Thai politics, the recent coup is thus seen by this group as redemption for the army, which is now in a position to reclaim its former prominent role in Thai politics after a long hiatus. The picture will become clearer after 30 September 2007 when General Sonthi Boonyaratglin, chairman of the Council for National Security (CNS) and leader of both the coup and the former Council of Democratic Reform (CDR), retires from his army post. Meanwhile, General Sonthi has kept the Thai public guessing whether or not he will enter politics, and if so by what means.