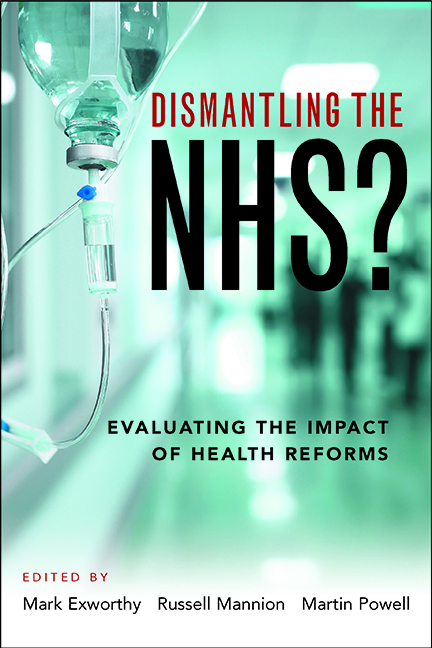 Dismantling the NHS?
Evaluating the Impact of Health Reforms

five - The central management of the English NHS

The English NHS, serving over fifty million people, is one of the largest health care systems in the rich world (Greer 2006). It is no wonder that making it respond to its political direction has been a long-time preoccupation of its political directors. Since its creation in 1948, there have been constant attempts by Ministers to keep the NHS under central political control in ways which are commensurate with the political salience of the service, and the high levels of taxpayer funds which pay for it. NHS professionals, working in a service which is necessarily local, complex and made up of a diverse set of organisations, have tended to resist central control and political interference. The centralisation of the English NHS has thus been a decades-long project, with the Coalition government's 2012 reforms of the NHS forming a dramatic new chapter in this pull between central control and local autonomy. This chapter focuses on the central management of the NHS: the central organisations in Westminster charged with making and implementing NHS policy. It quickly reviews the central management of the NHS in 2010, then focuses on the architecture proposed for it by the Coalition reforms and its subsequent evolution. It concludes by arguing that the Coalition reforms might best be seen as part of a cycle in central management that has been happening for decades in the NHS and perhaps other public services.

The impact of the Coalition's policies on the central management of the NHS, and the role and shape of that centre, make sense in the context of this decades-long struggle and the organisational tools that previous governments have employed in their efforts to manage the NHS. The later Blair years, after a period of forceful central direction by Secretary of State Alan Milburn, had seen the introduction of more ‘mimic market’ (Klein, 1998) mechanisms. These included a centrally set tariff, increased openness to (and welcome for) private and social sector providers, and independence for the trusts, which could if they wanted to become more autonomous Foundation Trusts (FTs). In 2004, the government created a special central regulator for the FTs, Monitor, whose task was to be the gatekeeper to FT status and then monitor the financial stability of trusts that successfully became FTs.