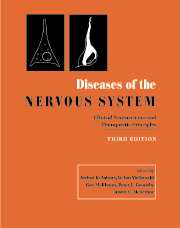 In the 10 years since the second edition of Diseases of the Nervous System appeared, extraordinary change has taken place in the field of neurosciences, both basic and clinical. In accordance with what is happening in the neurosciences, major changes have occurred with this third edition. Organization of subject matter and ordering of topics has changed substantially, in some cases dramatically. Of the contributors, a number of the authors for the previous two editions have written again in their special fields of expertise, but overall, more than three-quarters of the contributors are new to these pages. Two new editors have been added, Peter J. Goadsby and Justin C. McArthur; Cambridge University Press is the new publisher; and a new subtitle, Clinical Neuroscience and Therapeutic Principles has supplanted the previous one.

Despite these changes, the purpose of these reference volumes remains the same, namely to summarize what the scientific method, as applied to problems of neurological dysfunction, has taught us about the pathophysiology of neurological disorders. To say it differently, our purpose is not to focus on incidence, natural history, phenomenology and semeiology of neurological disorders, although these aspects are touched upon, but rather to focus on the mechanisms of neurological disease and the principles that form the basis for management and therapeutics. In addition to the emphasis on pathophysiology and principles of therapy, three other axioms guided the planning of this edition, just as they did for the previous editions. First, contributors were chosen who brought clinical expertise to bear as well as scientific authoritativeness. Second, we tried to assure that the depth with which each topic covered was relatively uniform from one chapter to the next. There is a corollary to this principle of uniformity. Given that these volumes are a general reference covering the entire field of neurological disorders, each chapter is, by necessity, a relatively brief summary of where matters stand in that particular disorder or area of interest. This level of detail will be insufficient for some readers. When this is the case, readers are urged to consult the primary literature listed in the references.