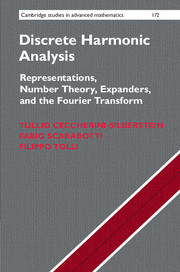 from Part III - Graphs and expanders

This chapter is an introduction to the theory of expanders and Ramanujan graphs. It is based mainly on the exposition in the monograph by Davidoff- Sarnak-Valette [49] and the paper [74]. First of all, we present the basic theorems of Alon-Milman and Dodziuk, and of Alon-Boppana-Serre, on the isoperimetric constant and the spectral gap of a (finite, undirected, connected) regular graph, and their connections. We discuss a few examples with explicit computations showing optimality of the bounds given by the above theorems. Then we give the basic definitions of expanders and describe three fundamental constructions due to Margulis, Alon-Schwartz-Schapira (based on the replacement product, cf. Section 8.12), and Reingold-Vadhan-Wigderson [128] (based on the zig-zag product, cf. Section 8.13). In these constructions, the harmonic analysis on finite Abelian groups (cf. Chapter 2) and finite fields (cf. Chapter 6) we developed so far, plays a crucial role.

The original motivation for expander graphs was to build economical robust networks (e.g. for phones or computers): an expander with bounded valence is precisely an asymptotic robust graph with the number of edges growing linearly with size (number of vertices), for all subsets. Since their definition, expanders have found extensive applications in several branches of science and technology, for instance: in computer science, in designing algorithms, error correcting codes, extractors, pseudorandom generators, sorting networks (Ajtai, Komlos, and Szemerédi, [6]), robust computer networks (as in their initial motivation), and in cryptography (in order to construct hash functions: these are used in hash tables to quickly locate a data record given its search key). From a more theoretical viewpoint, they have also been used in proofs of many important results in computational complexity theory, such as SL = L (Reingold, [126]) and the PCP theorem (Dinur, [56]).

In this section we present the discrete analogues, due to Dodziuk [57] and Alon-Milman [9], of the well-known Cheeger-Buser inequalities in Riemannian geometry (cf. [38] and [26, 27]).