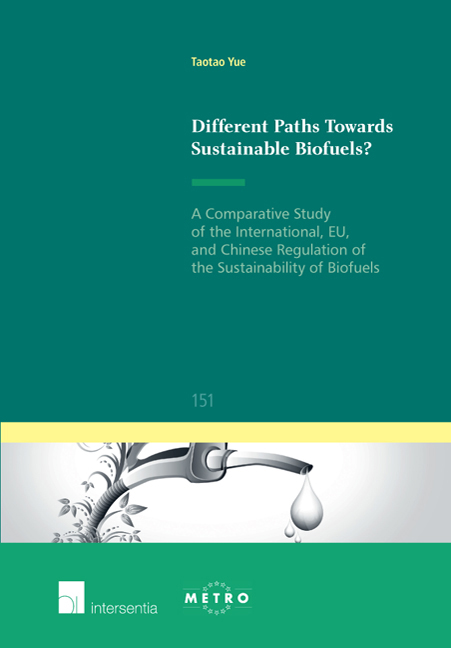 Chapter 4 - Chinese Regulation of the Sustainability of Biofuels

This Chapter aims to analyse the regulatory approach towards the sustainability of biofuels in China. ‘Biomass energy’ (sheng wu zhi neng) is identified as one of the renewable energies in the Renewable Energy Law of China, which is defined as including solid and gaseous biomass and liquid biofuel (sheng wu ye ti ran liao) such as bioethanol and biodiesel. For coherence in terminology, this chapter uses the term ‘biofuels’ to refer to the biomass-derived fuels for use in transport. China is currently one of the leading biofuel (particularly bioethanol) producing countries, which could be attributed to the biofuel support policy since 2002. In line with the research questions of this thesis, an analysis of the regulatory approaches that address sustainability of biofuels in China will be carried out, as well as an examination of how they can address the inclusive sustainability concerns. Such an analysis, however, has the following characteristics in this chapter.

First, an analysis of the regulation of the sustainability of biofuels will include both the legal and policy measures of the central government for constraining any environmental or socio-economic impact of biofuels. China has a unitary legal system with multiple (or two) levels, and there are various legal sources including the Constitution, law (fa lv), administrative regulations (xing zheng fa gui), local regulations (di fang xing fa gui), departmental rules (bu men gui zhang), and local government rules (di fang zheng fu gui zhang). In addition to the stipulated legal sources, policy documents issued by the central government play an important role in regulating and governing the society. The Chinese government has a tradition of relying on policy documents as the primary tool of governing the society until a shift to the ‘rule of law’ comes about. As yet, the government has kept the practice of issuing policy documents to implement experimental reforms and then translates them into legislation based on experience gained from the experimentation. Moreover, policy documents are used to set out strategic social and economic development plans: as a legacy from the planning economy, China has continued to formulate ‘five-year plans’ (wu nian ji hua) (renamed as ‘five year guidelines’ since the 11th Five Year Plan) to set out macro-level social and economic development policies and strategic plans, and this approach remains to be an integral part of China's system of governance.