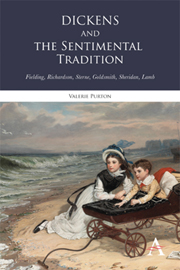 Chapter 5 - The Early Novels and The Vicar of Wakefield

‘Everything in our lives, whether of good or evil, affects us most by contrast.’

The plots of Dickens's early novels are all structured around the preservation of sentimental values – the good heart, innocence, benevolence – in a changing and potentially dangerous world. This seems initially to involve a very severe segregation of good from evil. Sentimental characters and scenes are cordoned off from the darker forces in each novel in a way critics have assumed to be simplistic and unchallenging. This chapter will seek to show, however, that even in these early novels Dickens is prepared to take risks, both ethical and stylistic, to critique the sentimental values he is at pains to propagate. I shall refer briefly to The Pickwick Papers and Oliver Twist before turning to the three novels which are most germane to my examination of the sentimentalist tradition, Nicholas Nickleby, The Old Curiosity Shop and Martin Chuzzlewit. I begin however, with some brief comments on Dickens's own favourite novel, The Vicar of Wakefield.

The Vicar of Wakefield

Oliver Goldsmith's masterpiece was a great influence on the sentimentalism of Dickens's early novels and a particularly powerful presence behind The Battle of Life – indeed, Dickens suggested that his characters in that most untypical Christmas book should be depicted in the illustrations ‘in the coats and gowns of dear old Goldsmith's day’. Goldsmith's masterpiece, said Dickens, is a book ‘of which I think it is not too much to say that it has perhaps done more good in the world, and instructed more kinds of people in virtue, than any other fiction ever written’.