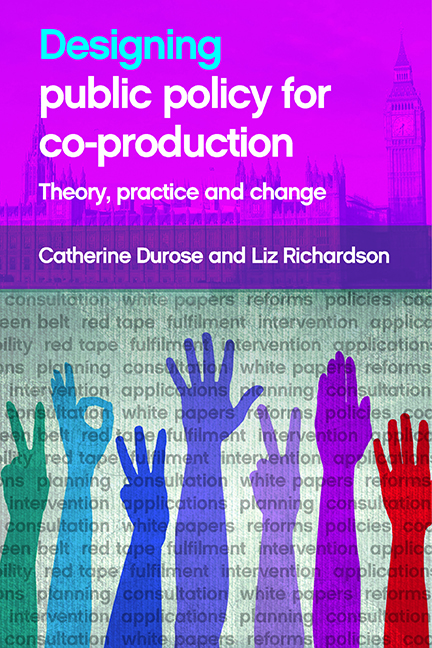 Design is about ‘designing schemes for designing institutions’ (Goodin, 1996 p. 28 cited in Lowndes and Roberts, 2013, p. 187). But design is ‘not a cookbook’; there is no simple fail-safe recipe to follow (Bobrow and Dryzek, 1987, p. 207; Boyer, Cook and Steinberg, 2011, p. 87). The stagist model of the policy process has been rejected in favour of an acknowledgement that policy is messy, political, chaotic, with many unforeseen and/or uncontrollable contingencies affecting outcomes (Bovens and t’Hart, 1996). However, a commitment to the potential for policy to be more than a ‘fuzzy gamble’ (Dror, 1986, p. 168) on outcomes and the lives of citizens can be retained. Building on the heuristics of policy design in the opening chapters, this chapter returns to the notion of power as positive sum, non-dominating and relational set out in Chapter One to explore the vision and grammar of coproductive policy design. Chapter Three considers the possibility of introducing co-productive elements into conventional policy design through vision and grammar.

Thinking through the vision and grammar of co-productive policy design and the possibilities for introducing such elements resonates with wider debates on co-production. In its origins, and in the sense used in this book, co-production is a term associated with the research of Elinor Ostrom. In her work on the management of common-pool resources, such as access to water, Ostrom (1996, p. 1073) used ‘co-production’ to describe a process through which ‘inputs from individuals who are not “in” the same organisation are transformed into goods and services’. The term ‘co-production’ suggests a relationship between ‘regular producers’ (policy makers and practitioners) and ‘clients’ (service users) (Ostrom, 1999), specifically where the ‘client’ acts not as a ‘consumer’ of services, but as a ‘co-producer’ of them. The implication here is that citizens can play an active role in producing public goods and services of consequence to them (Ostrom, 1996, p. 1073). Co-production has become a ubiquitous term in contemporary policy, which builds on a rich, diverse and contested lineage of theory and experimentation. Chapter Three considers this background before looking at how ideas of co-production can help to inform the vision and grammar of more co-productive policy design.