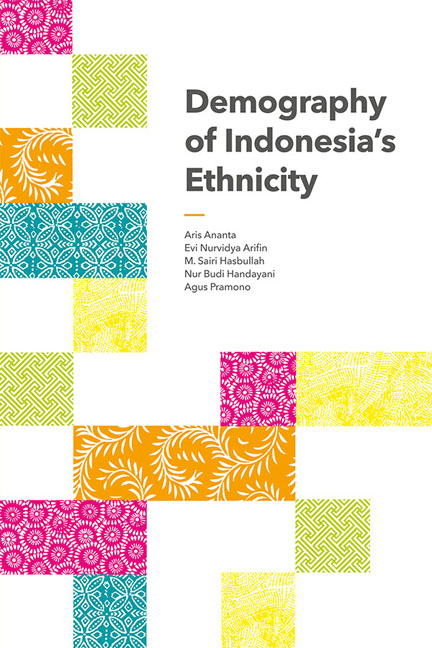 This chapter elaborates on the various ethnic group populations, who can be seen as both consumers and producers of development. Specifically, the chapter examines the age-sex and geographical distribution of these ethnic groups. These data are especially useful for marketing and for both commercial and non-commercial purposes. In democratizing Indonesia, this knowledge is also very important for analysing electoral behaviour and understanding geopolitics.

Following a life-cycle approach, we disaggregate the population into different stages, each with a different impact on society and the economy. In this book, we classify a population into five age groups: infants and toddlers (0–4), children (5–14), youths (15–24), prime-working-age adults (25–59) and older persons (60 years and above).

Infants and toddlers (0–4) are highly physically and financially dependent and potential recipients of health services in their early years. They need caregivers to support them. Children (5–14) are also potential ‘customers’, as they are financially dependent on adults. At these ages, they cost their parents most in terms of their education. Altogether, the population aged 0–14 potentially burdens the economy with spending on health and education. At the same time, this expenditure can also be seen as investment in human capital for the nation.

Next to the dependent infants, toddlers and children are the youths (15–24). This group can be costly if the parents have higher aspirations to provide their children with tertiary education (until age 24). Therefore, youths may be added to the group of dependants (infants, toddlers and young children). In addition, youths are in transition to adulthood, ranging from entering the labour market, searching for a partner, starting a career and building a family. The youth bulge, often associated with negative things such as crime, is defined when the percentage of youths exceeds 20 per cent.

The top part of the population pyramid is the group of older persons, aged 60 years and above.