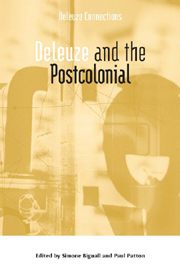 7 - ‘Another Perspective on the World’: Shame and Subtraction in Louis Malle's L'Inde fantôme

What is the source of the shame with which writers of the ‘West’ so frequently seem to approach their interactions with the ‘non-West’? What is its ethical significance? What is its relation with its supposed contrary, the shame of the colonised subject? Is there any political potential to postcolonial shame, other than as something that we need to ‘get over’? Can we envisage a form of writing that would be free of the shame of the post-colonial epoch, a truly postcolonial literature?

Such questions seem as urgent and intractable as they have ever been. This chapter will try to navigate them by suspending the inclination to see shame as a problem requiring a solution, or as implicated in a relation of cause and effect, for any such relation would suggest the possibility of a simple reversal, a narrative of exculpation or exemption from shame. Likewise, it is necessary to resist the temptation to extract ourselves, ethically or methodologically, from the situation of a ‘postcolonial shame’, or even to approach shame as a theorisable term, since in the postcolonial situation we cannot guarantee that such a project of ‘theorisation’ would itself be free of implication in shame. This essay will consider, rather, what happens if we understand shame not in ‘ethical’ terms but ‘ontological’ ones – not as an entity that may be removed from the present, but one from which the present, including any questions that we might direct towards the present, is inseparable. It seems impossible even to assume that the shame of the postcolonial present arises from the colonial past, and that it will disappear once colonial structures of power have been eradicated.