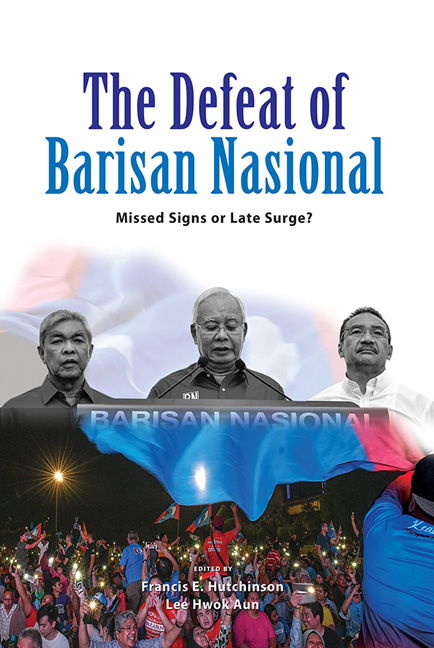 The Defeat of Barisan Nasional
Missed Signs or Late Surge?
Buy print or eBook[Opens in a new window]

The 14th General Elections (GE-14) in May 2018 witnessed the defeat of Malaysia's ruling political coalition Barisan Nasional (BN) by Pakatan Harapan (PH). Of the 222 parliamentary seats contested, the PH coalition secured 113 seats (52 per cent) compared to BN's 79 seats (36 per cent). BN's defeat was unexpected with most political pundits predicting the continuation of its rule, albeit with a slimmer majority. The BN coalition had governed Malaysia continuously since the country's first general election in 1955 and its independence in 1957. Thus, the election marked the end of one of the longest periods of continuous rule in modern times.

This leads to the question of what accounts for the defeat of BN in GE-14. In other words, what are the factors that can explain the outcome of the election? Did economic factors such as economic growth and inflation play a role in GE-14? Was the change in political regime brought about by the re-entry and active campaigning of the country's former Prime Minister Mahathir Mohamad? Did the party splits in Malay-based parties such as Parti Islam Se-Malaysia (PAS) and the United Malays National Organization (UMNO) contribute to PH's victory in GE-14? Was there a decline in the support of the bumiputra community for UMNO which contributed to BN's defeat?

The aim of this essay is to empirically examine economic and non-economic factors that determined the outcomes of the 2018 election. GE-14 was different from previous elections in Malaysia in that it involved regime transition, namely, the end of dominant party rule. As such, although the economic voting model is used to investigate the determinants of electoral outcomes in Malaysia, attention is also paid to factors identified in the empirical literature on the end of dominant party rule.

The outline of the rest of this chapter is as follows. The next section frames the research problem by reviewing the literature on economic voting as well as the end of dominant party rule. This is followed by qualitative discussions on the economic conditions and political changes leading up to GE-14 in Malaysia. An econometric analysis of the determinants of electoral outcomes is carried out in the subsequent section. The final section concludes.