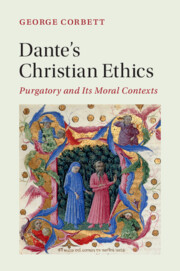 The Epistle to Cangrande classifies Dante’s Commedia as ‘a work of ethics’ (morale negotium, sive ethica): its stated purpose is to lead people from the misery of sin and direct them to the beatitude of Heaven. If the epistle was written by Dante, as the balance of scholarship would currently suggest, to read the poem ethically is to read it as Dante originally intended. If this part of the epistle was not written by him, as some scholars still argue, the fact remains that an important early glossator of the poem thought it natural and appropriate to classify the poem in this way. In the narrative itself, the poem’s ethical goal is unambiguous: Beatrice commands Dante-character to write ‘for the good of the world which lives badly’ (‘in pro del mondo che mal vive’; Purg. xxxii, 103). Moreover, as is conventional in ethical treatises, the Commedia is described in medicinal terms: Cacciaguida inspires his descendent with the courage to ‘make plain all your vision … For if your voice is grievous at first taste, it will afterwards leave vital nourishment when it is digested’ (‘tutta tua visïon fa manifesta … Ché se la voce tua sarà molesta / nel primo gusto, vital nodrimento / lascerà poi, quando sarà digesto’; Par. xvii, 128, 130–32). Dante’s poem is ‘vital’ (life-giving) nourishment because it may save its reader from damnation, the second death. Indeed, by depicting the state of souls in the afterlife, the Commedia shows how a person – through the use of his or her free will – may merit eternal happiness in Paradise, warrant eternal damnation in Hell, or require temporary expiation for sin in Purgatory.