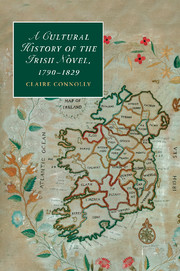 This book offers a cultural history of the Irish novel in the period between the radical decade of the 1790s and the gaining of Catholic Emancipation in 1829. During those years, a group of talented Irish writers developed and advanced such innovative forms as the national tale and the historical novel. They wrote fictions that took Ireland as their topic and setting, often imagining its history via domestic plots that addressed wider issues of dispossession and inheritance. Their novels regularly incorporated footnotes and extra-fictional material as spaces of cultural mediation. Such openness to contemporary politics, as well as to recent historiography, antiquarian scholarship, books of travel, poetry, song, plays and memoirs, produced novels of notable permeability. Irish fiction is defined by this porosity: the novel became an active cultural agent in the period because of its ability to absorb and reshape other discourses in the context of wider shifts in the aesthetics of locality and nationality, the politics of representation and the meaning of national culture. At the same time, however, Irish novels circulated as commodities on the cultural market, and as such possess material as well as ideal forms of value. The mode of analysis proposed in this book is a cultural history alert to the rich array of relations that existed between these novels, the world from which they emerged, and the print culture in which they participated.

A major aim is to restore seriousness and nuance to our understanding of the Irish fiction of the romantic period, and to refuse or at least redirect readings that treat the novels as so many failed efforts to contain the hectic world of early nineteenth-century Ireland. The fictions which I discuss have been repeatedly characterised in terms of an engagement with political reality that is nonetheless blocked by a tendency towards ‘wishful thinking and happy endings’. These ‘modes’ – surely quintessentially fictional ones – are thought to issue in forms of ‘premature closure’ and a failed effort ‘to seal off the injuries of the past from the present’. In such accounts, Irish novels are at one and the same time deeply and compellingly involved in the situation they depict, yet distressingly unable to produce the right kind of combination of political and aesthetic resolution. Imagined as ‘desperately struggling to encompass the wildly divergent class divisions of pre-Famine Ireland within one fictive frame’, the nineteenth-century Irish novel is fated never to intervene effectively in a situation that it is barely able to represent. Whereas once these fictions were judged patronising because alienated from the situation that they sought to represent – ‘traveller’s tales’, as Daniel Corkery put it – more recently, it is the supposed combination of effort and failure that has generated comment. The idea that Irish national novels carry the burden of a specific political project – fuller union between Ireland and Britain – remains, but critics now condemn the fictions for both their presumed politics and their inability to realise them.