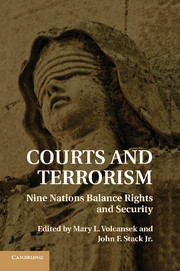 10 - Squaring the Circle? Fighting Terror while Consolidating Democracy in Spain

During the morning rush hour on March 11, 2004, ten bombs exploded on four trains around the metropolitan area of Madrid. The ten bombs, as well as three others that did not explode, had been placed by a group of jihadist terrorists protesting Spain's participation in the war in Iraq. It was the largest terrorist attack ever perpetrated in Spain, leaving 191 dead and 1,800 injured. It was not, however, Spain's first experience with terrorism. Spaniards have lived with domestic terrorism for decades. Terrorist groups that appeared in the 1960s during Franco's dictatorial regime did not all die out with Franco's death. The Basque separatist group, ETA, has continued to be particularly active. This group resorts to terrorism in an attempt to force a declaration of independence for the Basque Country. The Basque Country has three provinces in northern Spain (four, say the most uncompromising, who also include Navarra) and three provinces in southern France, where ETA also operates; indeed France and Spain cooperate in the fight against ETA. ETA pursues the independence of all six (or seven) Basque provinces and the declaration of a Basque state independent from both Spain and France.

The persistence of terrorism posed a serious threat to Spain's new democracy, particularly during its earliest and most fragile years. Turning Spain into a democracy at the end of Franco's dictatorship was a delicate political operation that required a careful balancing of opposing political forces, those that demanded an immediate transition to democracy and those on the other side of the political spectrum that opposed any major political change.