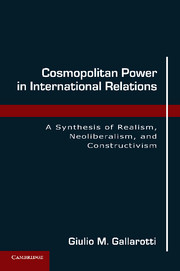 This book develops a theory of power in international relations that builds on the idea of smart power. I refer to it as Cosmopolitan power. It is different, and in many circles even considered bold and iconoclastic, because it attempts to cross paradigmatic boundaries that previously were fairly impenetrable, especially on the subject of power. It attempts to construct some overlapping theoretical set from the three main paradigms in international relations on this subject of power – Realism, Neoliberalism, and Constructivism. Because the paradigmatic boundaries have been so imposing, such syntheses have remained elusive at best. Moreover, attempting a synthesis among the three paradigms in the context of the issue of power appears even more imposing because power may be the most salient point of conflict among the paradigms. Realism has been known as the paradigm that embraces the idea of power seeking, whereas Neoliberalism and Constructivism have been viewed as antithetical (even subversive) to the idea of power seeking. However, such attempts to balance various strands among competing paradigms may prove fertile ground for building more useful theories of power – theories that hold the key to enhanced influence for nations. Greater power may be achieved through balance than through paradigmatic parochialism. Moreover, the synthesis proposed by Cosmopolitan power suggests that not only does a common intersecting set emerge among the paradigmatic tenets, but that the various paradigms actually rely on each other to achieve the important goals each espouses with respect to national influence.

There have been attempts to integrate some or all of these paradigms at both specific and more general levels. These have come principally from the Neoliberals and Constructivists. There has been little interest from the Realists (Sterling-Folker 2002, 74; Copeland 2000). Whereas Constructivists and Neoliberals appear to overlap significantly by embracing institutions (i.e., principles, norms, rules, regimes, and other phenomena undergirding cooperation among nations), the two paradigms traditionally have been seen by Realists as antithetical (Barkin 2003, 325). Yet even the limited forays into the quest for paradigmatic syntheses have failed to venture into the very issue that, as Berenskoetter (2007, 1) notes, holds the study of world politics “together” – that of power. As noted, power has been seen as the point of greatest divergence among the paradigms (Wendt 1999, 114). Because the theory of Cosmopolitan power marshals an integration of power relations among the three paradigms – the issue thought to be least likely to bridge the theoretical gap – these findings could be considered both compelling and “crucial” from a scientific point of view (Eckstein 1975; Gerring 2004, 347; King, Keohane, and Verba 1994, 209–12). Moreover, Cosmopolitan power generally supports important tenets of Realism; the augmentation of power, the optimization of power, and the quest for security are all legitimate goals of the state, and power relations unfold in what is fundamentally an anarchic environment. In this respect, the paradigmatic integration represented by Cosmopolitan power will potentially generate greater interest for Realists who previously have been reluctant to consider a theoretical interfacing with Constructivist and Neoliberal categories.