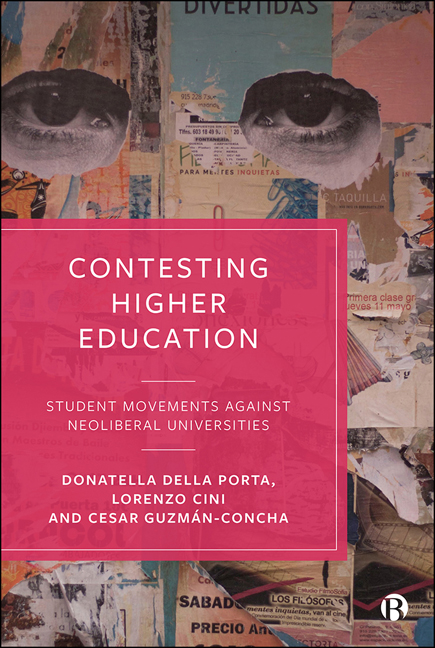 Although differences between countries continue to be pronounced, national HE systems are becoming more alike in the sense of being more market-oriented, even in countries with a strong welfare tradition. Fighting back against these processes, student protests arose unexpectedly – to a certain extent – in several countries across the five continents, with particularly intense waves in countries such as South Korea and India in Asia, Chile and Mexico in Latin America, Canada and the United States in North America, South Africa and Nigeria in Africa, and Italy, England, and Germany in Europe. Thus, recent years have witnessed the rise and proliferation of student mobilizations as a collective response to the expansion of neoliberal capitalism and its policies in the field of HE (Cini and Guzmán-Concha, 2017; Cini, 2019b).

Historically, students constituted the fundamental segment of various political movements, ranging from the nationalist European movements in the 19th century, to the environmental, urban, anticolonial, and peace movements in the second half of the 20th century, until the more recent mobilizations associated with the ‘Arab Spring’ and the ‘Occupy’ movements. Students have often played a clear political role in modern society (Sukarieh and Tannock, 2015).

However, it is with the 1968 wave of global contestation that the collective power of students fully materialized in HE institutions (HEIs) in the form of activism. The 1968 protests marked the era of the politicization of the student condition, as such (Altbach, 1991). While university systems in many parts of the world had expanded significantly over the 1960s, taking in larger and more diverse student bodies, university policies and practices remained elitist and traditionalist. Contesting the authoritarian and hierarchical way in which universities were organized and governed, student protesters around the world demanded a more democratic and accessible HE, more rights and freedom on campus, greater involvement in university governance, and a more coherent and relevant curriculum. Through such mobilizations, students aimed also at putting forward an alternative conception of society based on values of equality, solidarity and social justice (Breines, 1989). The greatest impacts of 1968 mobilizations were a general democratization of university institutions, with more student involvement in governing bodies, the development of new curriculum areas, and greater attention paid to ensuring student rights and freedom on campus (Cockburn and Blackburn, 1969).