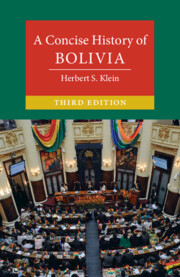 The forced resignation of the last military junta in September 1982, and the decision to recall the Congress that was elected in 1980, finally brought an end to the era of military authoritarian regimes in Bolivia. This reconstituted Congress immediately elected Hernán Siles Zuazo to the presidency in August 1982. In one stroke, the democratic political system was revived. On the left was Siles Zuazo, the leader of the reconstituted progressive wing of the MNR, who was allied with traditional labor leaders of the COB, newer peasant leaders, various parties of the left, and the important MIR group of radical intellectuals led by Jaime Paz Zamora, who became his vice president. To the right and center were the parties that had run in the original 1979 and 1980 elections, all now well-developed political forces that would dominate the national political scene for the next decade. In the center was the historic MNR – led by Víctor Paz Estenssoro – which incorporated both the existing center and right of the party, and a group of older Indian leaders who, although they had become independent of the MNR, still gave strong support to Paz Estenssoro. Finally there was the ADN (Acción Democrática Nacionalista), the party founded by Banzer at the end of his military rule, which he expanded in April 1979 to include elements of the old Falange as well as the reconstituted PIR. To the surprise of many, this party proved more forceful than expected and not only legitimated Hugo Banzer as a powerful civilian leader but also gained the support of the new economic elites, such as the private mining entrepreneurs and large-scale farmers of Santa Cruz, as well as many of the highly trained technocrats who had emerged in the twenty-five years since the National Revolution. Banzer managed to distance himself from the military juntas of the 1979–82 period and consistently supported democratic processes, thus becoming a pillar of the civilian political system. The military interregnum had delayed the emergence of a younger civilian political leadership and thus provided one last chance for the old leaders of the National Revolution to rule. While the leadership in the first part of the 1980s was from the 1950s, by the second part of the decade a new circle of younger politicians had begun to take over the national political scene. It also led to a third generation of political leaders who would emerge in the next century with much higher participation from indigenous and mestizo leadership and ever more popular movements. Thus, 1982 marked the beginning of one of the longest periods of political stability and democratic participation in the history of the nation.