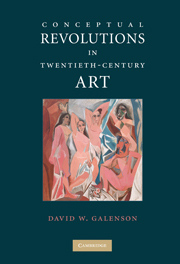 9 - Painting by Proxy: The Conceptual Artist as Manufacturer

It sometimes seems to me that the labor of the artist is of a very old-fashioned kind; the artist himself a survival, a craftsman or artisan of a disappearing species, working in his own room, following his own homemade empirical methods, living in untidy intimacy with his tools…Perhaps conditions are changing, and instead of this spectacle of an eccentric individual using whatever comes his way, there will instead be a picture-making laboratory, with its specialist officially clad in white, rubber-gloved, keeping to a precise schedule, armed with strictly appropriate apparatus and instruments, each with its appointed place and exact function…So far, chance has not been eliminated from practice, or mystery from method, or inspiration from regular hours; but I do not vouch for the future.

In 1955, in the A.W. Mellon Lectures in the Fine Arts at the National Gallery of Art, Washington, the French philosopher Étienne Gilson, a member of the Académie Française, presented his analysis of the art of painting. These lectures were published in both English and French in 1958. Early in this discussion, Gilson reflected on the essence of painting:

The nature of painting is such that the artist who conceives the work is also the one who executes it. This proposition is not necessarily true of the sculptor, but it is assuredly true of the painter. Except for tasks of secondary importance that can easily be left to his assistants, it is the painter himself who confers the material and physical existence upon the work he conceives.