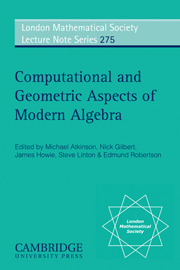 12 - Some Applications of Prefix-Rewriting in Monoids, Groups, and Rings

Abstract. Rewriting techniques have been applied successfully to various areas of symbolic computation. Here we consider the notion of prefixrewriting and give a survey on its applications to the subgroup problem in combinatorial group theory. We will see that for certain classes of finitely presented groups finitely generated subgroups can be described by convergent prefix-rewriting systems, which can be obtained from a presentation of the group considered and a set of generators for the subgroup by a specialized Knuth-Bendix style completion procedure. In many instances a finite presentation for the subgroup considered can be constructed from such a convergent prefix-rewriting system, thus solving the subgroup presentation problem. Finally we will see that the classical procedures for computing Nielsen reduced sets of generators for a finitely generated subgroup of a free group and the Todd-Coxeter coset enumeration can be interpreted as particular instances of prefix-completion. Further, both procedures are closely related to the computation of prefix Gröbner bases for right ideals in free group rings.

There is a recent shift in paradigm in mathematics, and in modern algebra in particular, from pure structural considerations back to the notion of computability, that is, one is not merely interested in the structural properties of the mathematical entities under consideration, but one wants to actually perform computations in these structures.

This development has been preceded by that in combinatorial group theory, where algorithmic questions have been of major concern since the beginning of the century. In 1911 Dehn formulated three fundamental decision problems for groups given in terms of generators and defining relations [Dehll], the most famous of which is the word problem.