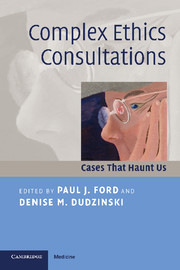 A book on “Cases that Haunt Us” is a summons to realism in clinical ethics. Since the origins of bioethics in the 1970s, and since its turn into the clinical world in the 1980s, bioethicists have fretted over theories, principles, and methods. They have explored the theories that philosophers have created to think about and resolve ethical problems, filling pages with explanations of deontology and consequentialism. They have argued over the definitions and priorities of autonomy, beneficence, and justice. They have delved into antique methods, such as casuistry, and devised new ones, such as Rawlsian reflective equilibrium. In all of these efforts, ethics appears as a rational activity, striving to define, analyze, and resolve a problem. Certainly, some approaches, such as narrative ethics, discount the claims of excessive rationality, and casuistry disclaims the value of rational deduction. Still, bioethicists, particularly those who engage in clinical consultation, have hoped to be “solvers” of problems.

In the opening days of bioethics, one of its founders, Dan Callahan, called for the construction of a discipline that employed philosophical logic and explored “the unfettered imagination, the ability to envision alternatives, to get into people's ethical agonies … and sensitivity to feelings and emotions.” Still, in its conclusions, bioethical thinking should reach “reasonably specific and clear decisions in the circumstances of medicine and science.”

“The circumstances of medicine” do present a basic problem to philosophical ethics. “Reasonably clear and specific decisions” are often confounded by the tragedies of death and disability, by the uncertainty of diagnosis and treatments, and the complexity of cases that include not only a patient and a doctor but a surrounding family, religion, money, hospital, and many other social structures.