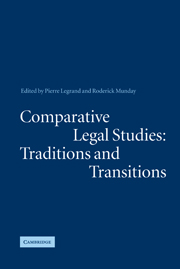 1 - Accounting for an encounter

‘[L]’on peut comparer sans craindre d'être injuste.' Safe in that knowledge, the contributors to this book met in a closed seminar in Downing College, Cambridge between 26 and 30 July 2000 to debate comparative legal studies, almost exactly a century to the day after the Société française de législation comparée had held its landmark Congress in Paris. The Cambridge Conference was, of course, intended to mark the centenary of the Paris Congress. To this end, fifteen scholars from around the globe, representing widely diverse strands of comparative scholarship, were invited to speak to comparative legal studies at the millennium within their specialist fields and then, drawing freely upon their research, to reflect upon fruitful lines of inquiry for the future. The present volume comprises papers presented and discussed on that occasion in Cambridge. The Cambridge Conference may not have reaped the incidental benefit of a universal exhibition which, in 1900, coincided with the Paris Congress. But like its Paris predecessor, finding itself poised on the threshold of a new century inevitably lent a symbolic edge to the enterprise. In broad imitation of its Parisian forebear, the Cambridge Conference was intended to provide a tour d'horizon of the current state of the comparative endeavour in the specific context of legal studies.

The impact exerted by the Paris Congress on the subsequent development of the subject is underscored by Konrad Zweigert and Hein Kötz on the opening page of their well-known textbook:

Comparative law as we know it started in Paris in 1900 […].[…] The science of comparative law, or at any rate its method, was greatly advanced by the occurrence of this Congress, and the views expressed at it have led to a wealth of productive research in this branch of legal study, young though it is.