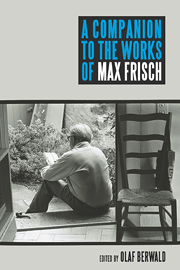 Literary scholars and critics have not discussed Max Frisch's essays and speeches in a comprehensive manner yet, even though they constitute a considerable part of his prose texts and develop thematic threads found throughout the fabric of his work. the recipient of numerous literary prizes, Frisch used the genre of award acceptance speeches to reflect on creative tensions between aesthetic curiosity and ethical responsibility. His essays and speeches can be read as one continuous text throughout which Frisch juxtaposes the conflicting but mutually enriching voices of the writer as an artist whose projects are playfully open-ended and a concerned global citizen who discusses world affairs. While Frisch's essays inhabit a border zone between artistic exploration and political engagement, he disliked the notion of littérature engagée.

It is impossible to discuss the full range of Frisch's essayistic work and his speeches in this chapter. the following discussions focus on Frisch's central thematic clusters: the ethics and poetics of writing and theater, global and Swiss politics, and existential questions of death and hope.

On Literature and Political Activism

Beginning in the 1930s, Frisch's essays explore the relationship of epistemic desire and the art of the narrative, as well as an anthropological condition that he calls, in the title of an essay published in 1960, “Unsere Gier nach Geschichten” (Our Greed for Stories). For Frisch, literature embodies at once a continuous, open-ended aesthetic experiment and a medium for undogmatic political engagement.