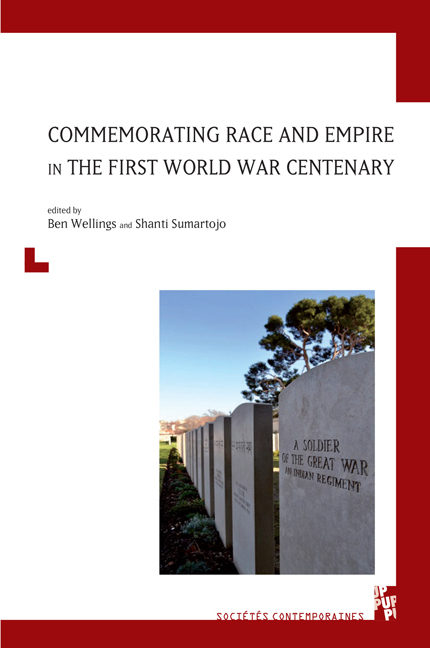 Commemorating Race and Empire in the First World War Centenary

Commemorating Race and Empire in the First World War Centenary

In November 2016, at the halfway point of the First World War Centenary, a modest exhibition based on volunteer research and supported by the UK Heritage Lottery Fund opened in the London suburb of Wood Green. Far from the Western Front presented accounts of South Asian servicemen who served across the many theatres of war. It was only mounted for a few days, but it sought to complicate both the dominant British narrative of the First World War as trench warfare in France and Belgium, and common depiction of the British forces as white. By focusing on the ‘untold stories of South Asians whose crucial contribution shaped the First World War’ the exhibit sought to remind (or inform) visitors that ‘there was more to the First World War than the mud and trenches of Europe’. The exhibit rediscovered stories that sought to shift common perceptions of the Great War in London and introduce alternative threats and hardships into the collective memory of the War: ‘the threat of lions on patrol in East Africa, thirst in the 50 degree heat of the Sinai desert, and starvation at the Siege of Kut’.

Yet if such broader experiences were common to many millions of people outside of Europe in 1914-1918, the representation of this aspect of the Great War was in a decidedly minor key in 2014-2018. David Olusoga argues that ‘the First World War has a unique characteristic that has – among another consequences – come to submerge the war's multinational, multi-ethnic and multiracial dimensions’. This book explores why this was the case and engages directly with the question of how race and empire were understood during the war, and how subaltern narratives were recognised, forgotten or commemo–rated one hundred years later. It shows why and how non-national narratives of region, race and empire were elided, forgotten and occasionally commemo–rated in particular ways at particular times and in particular places during the First World War centenary.

At its core is the argument that this process of remembering and forgetting has been conditioned in three important ways: