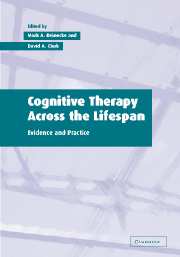 By
A. T. Beck
Edited by
Mark A. Reinecke  and
David A. Clark
Foreword by
Aaron T. Beck
Show author details

The remarkable development of cognitive intervention strategies to ameliorate maladaptive emotional and behavioral responses began in the 1960s with a specific focus on the use of cognitive constructs of depression and anxiety. In those days we relied on rather simple research methodologies and treatment formulations. What began as an attempt to redress oft-cited deficiencies in psychoanalytic and behavioral theory and treatment of emotional disorders has evolved 40 years later into a genuine paradigmatic shift in our approach to a broad range of psychological problems in children, adolescents, and adults.

Cognitive theory, therapy, and research have shown remarkable progress in a number of ways over the last few decades. Cognitive and cognitive-behavioral perspectives have been applied in very creative ways to a much broader range of clinical phenomena than originally imagined. New and innovative treatment approaches are continually under development and refinement. There is a greater understanding of the rapeutic issues involved in the immediate effectiveness and long-term efficacy of cognitive therapy, and in the processes of change. Research into the cognitive basis of psychological disorders has attained a much higher standard as a result of contributions from experimental cognitive, developmental, and social psychology. Newer theoretical models that recognize the multidimensional, interactive, and dynamic nature of the human condition have been proposed. Cognitive theory and research have been enriched by the ongoing contributions of a large number of researchers and practitioners from diverse backgrounds in experimental, social, and developmental psychology as well as psychiatry and the neurosciences.