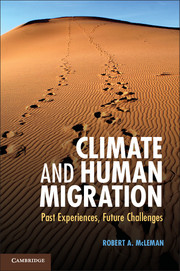 Climate and Human Migration
Past Experiences, Future Challenges
Buy print or eBook[Opens in a new window]

1 - An Introduction to the Study of Climate and Migration

Climate influences human migration. Sometimes the influence is direct and obvious, such as when people flee their ruined homes in the wake of a hurricane or tornado and do not return. Sometimes its influence is more subtle, such as when a string of dry years prompts an aging farmer to decide it is time to sell the land to a younger family and move to town. Sometimes climate’s influence is nested so deeply in interwoven chains of past events that we no longer notice how it has shaped where, how, and why we live in the places we do. It is not some random act of chance nor deliberate human plans that led southern England, southeastern Australia, and northern New Zealand to become the most densely populated regions of their respective countries, home to urban centers that continue to draw migrants from around the world. Climate played a role.

It is estimated that there are approximately 215 million international migrants worldwide (UN DESA 2011). Relatively few of them migrated for reasons directly and obviously tied to climate. If asked why they moved, most would likely answer that it was because of family reasons, or to search for work or new opportunities. Some might say they had to, because their household had grown too big to be able to support them. An unfortunate number, perhaps 20 per cent of the total, would answer that they had no choice, that they were forced to move because of violence, persecution, or natural disasters (some of which might be climatic in origin). Because climate is in proportional terms so rare a proximate cause of migration, scholars who specialize in migration research have largely tended to consider it in passing, if they consider it at all. Check any textbook used to teach undergraduate courses in migration over the past few decades, and you will find few mentions of climate.