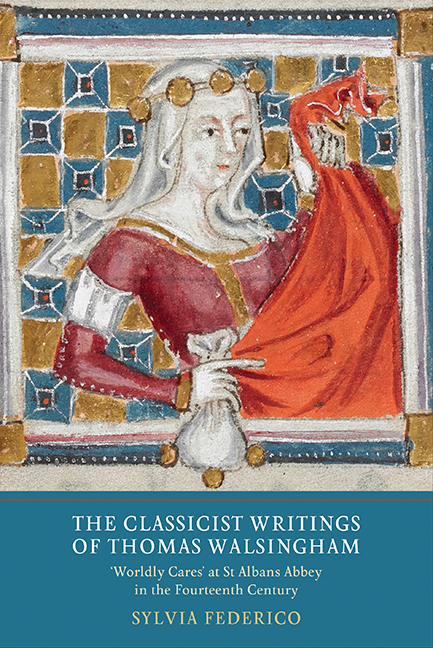 Monastic chronicling at St Albans, as across most of England, fell into a slump for most of the fourteenth century. John Taylor speaks of the particular ‘chronicle gap’ between 1340 and 1377, suggesting that the reign of Edward III ‘lacked the political interest of both the beginning and the end of the century’. That being true enough, as the spectacular difficulties of Edward II and Richard II naturally attracted avid commentary, it is more especially true that the reemergence of monastic chronicling in the late fourteenth century was largely led by the strength of one individual's interest and talent: the ‘tradition of historical writing which had languished for more than a century revived in the person of Thomas Walsingham’.

Walsingham was not literally alone in bringing back monastic chronicling (the Westminster Chronicler and Henry Knighton were notable contributors), but he is to be acknowledged as the premier chronographer of his day— certainly the most prolific and probably the best connected, he was also the most learned and most invested. Walsingham's exceptionalism in the revival of the monastic chronicle is attributable to his passionate commitment to the work of the writer, a deeply felt affinity for the play of language that grew out of his study of ancient poetry. This chapter will demonstrate that literary commitment through reference to his later classicist work and to the Chronica maiora itself.

To return to the Ditis ditatus just for a moment, we see that, for Walsingham, literary figuration is a political act. The text—as noted in the last chapter—is indebted to Boccaccio's De genealogia deorum in both its structure for listing the gods and its descriptive, rather than allegorical, attitude toward them. But Boccaccio's influence is further felt in Walsingham's Ditis ditatus in a comment on poetic theory, occurring at fol. 74r (almost exactly in the middle of the narrative). Where the Genealogia had concluded with a sustained discussion of the merits of literary falsification, Walsingham's Troy narrative pauses to distinguish between artless fabrication on the one hand (‘ineptum esse et mendacem pocius quam poetam’), and the fine falsity necessary for true poetry.