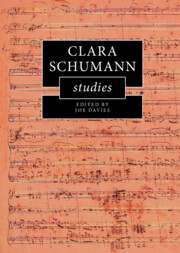 Clara Schumann’s Piano Trio in G minor, Op. 17, of 1846 holds a contested place in the nineteenth-century repertory. One of her finest compositional achievements, it was performed regularly throughout the nineteenth century. Yet she herself seems to have led the way for a languishing of its reputation when, upon its publication in 1847, she acknowledged that she ‘did not care for it particularly’ and that, by comparison to Robert Schumann’s Piano Trio in D minor, Op. 63, composed a year later, it now ‘sounded effeminate and sentimental’. This may represent nothing more than an internalization of the widespread belief at this time in women’s inferiority as composers, but her self-doubt cast a long shadow. Clara Schumann’s Trio is usually cited in recent scholarship merely to contextualize Robert Schumann’s Trios (Daverio, 1997; Nemko, 1997), or to exemplify the composer’s capacity for withdrawal into the private musical sphere by way of coping with the emotional and psychological distress with which she was dealing when she composed the piece (Reich, 1985, Rev. 2001; Ferris, 2004).

This chapter considers Schumann’s Trio in relation to a range of contemporaneous piano trios, and through the lens of the New Formenlehre, giving particular emphasis to fugal passages in the opening and closing movements. The striking pianistic virtuosity of this Trio is matched by a compositional virtuosity that significantly enhances our understanding of romantic sonata form. Schumann’s innovations are explored in relation to the Schumannian belief that only through interiority might virtuosity be legitimized and elevated. The chapter concludes with a consideration of Schumann’s Trio as a formal model for later Piano Trios by Robert Schumann, Johannes Brahms and Bedřich Smetana.