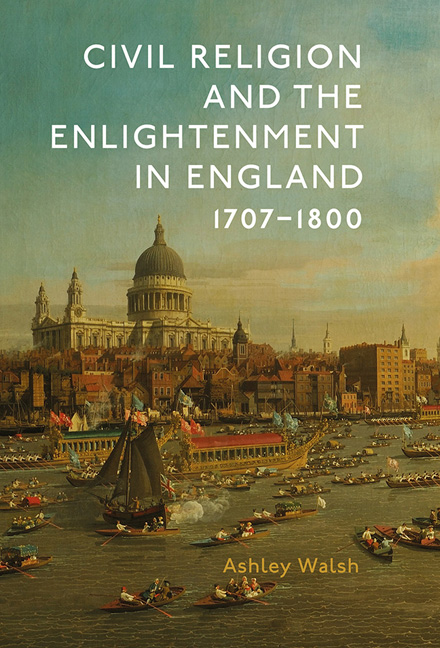 Civil Religion and the Enlightenment in England, 1707–1800
Buy print or eBook[Opens in a new window]

The twentieth century which has its own hairs to split may have little patience with Arius and Athanasius who burdened the world with a quarrel about a diphthong, but the historian has not achieved historical understanding, has not reached that kind of understanding in which the mind can find rest, until he has seen that that diphthong was bound to be the most urgent matter in the universe for those people.

The problem of Jean-Jacques Rousseau

Jean-Jacques Rousseau most famously put the problem. In The Social Contract (1762), he argued that it was impossible for Christianity to become a civil religion. Christians could never profess faith in the patrie. Among the ancient pagans, ‘every Religion was tied exclusively to the laws of the State which prescribed it’ and no citizen distinguished between ‘its Gods and its laws’. The church was an institution of the state and virtuous citizenship was compatible with religious piety. However, Christianity introduced a ‘Spiritual Kingdom’ that separated ‘the theological from the political system’. The ‘Kingdom of the other world’ occasioned civil disorder as Christians fought over its nature. Rousseau endorsed the claim of Niccolò Machiavelli in his Discourses on Livy (c. 1517) that Christianity was an otherworldly religion with no interest in civil life. Machiavelli had upbraided Christianity as a religion that made ‘us place a lower value on worldly honour’, glorified ‘humble and contemplative men rather than active ones’, and rendered ‘the world weak’. It left sincere believers the pawns of priestly ‘wicked men’ who pursued temporal ambitions under sacerdotal guises. Christian revelation made slaves of men whereas Roman paganism had harnessed popular piety for patriotic grandezza.

In the mood of the intense anticlericalism of the Enlightenment in France, Rousseau argued that Christian priests always sought to dominate the state. Christian ecclesiology created a ‘dual power’ and ‘a perpetual conflict of jurisdiction which has made any good polity impossible in Christian States’. Although some modern statesmen had attempted to restrain the church, nobody had ‘succeeded in settling the question of which of the two, the master or the priest, one is obliged to obey’. In England, monarchs had ‘established themselves as heads of the Church’ since the Protestant Reformation.